Chris reveals that he was engaged to Ned's sister and she was the first person to see his transformation into the werewolf.

There exists within the great house at Collinwood the malevolent spirit of a man long dead. This spirit has taken possession of young David Collins and forced him to leave Collinwood this night and go to the old cemetery at Eagle Hill. There in the Collins family mausoleum a terrifying creature is locked behind the wall of a secret room. David Collins will have no choice but to do what the spirit of Quentin Collins has ordered unaware that he will be placing his own life in danger.

Barnabas stops David from opening the secret panel in the mausoleum and brings him back to Collinwood. In the morning Barnabas lets Chris out and tells him that Ned Stuart is looking for him. Chris sighs in defeat and observes that after two years, Ned has finally caught up to him. Chris explains that he was engaged to Ned's sister and she was the first person to see his transformation into the werewolf. Barnabas asks Chris if he killed her, and Chris admits that he probably did.

David tells Quentin that he does not want to "play the game" anymore. Quentin then touches his arm and makes it feel like it is on fire. Maggie hears David screaming and the sound of a man's laughter.

David: Quentin, if we're really friends like you say we are, why won't you let me go?

Barnabas: I found you here once before, if you remember?
David: Yes, I remember.

Barnabas: The children may not know it but they need you desperately.
Maggie: Barnabas, I know David had Vicki to... to look after him for a long time and I know how fond he was of her.

Dark Shadows - Episode 689 on the IMDb 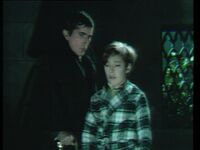 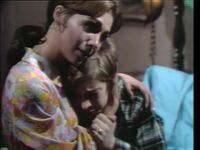 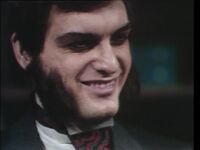