David goes to the Collins mausoleum and starts to open the secret room where the werewolf is held.

In the dead of the night a mysterious stranger has appeared on the Collins estate. He is there looking for Chris Jennings claiming he is a friend from years gone by. But he has aroused the suspicions of two people he has spoken to. Now while they wait for Chris to return to his cottage, Barnabas Collins and Julia Hoffman wonder whether this stranger in their midst knows the terrible secret that Chris Jennings has tried to keep from the rest of the world.

David writes a story about a man who turned into an animal and was hidden in a room, later someone lets the animal out of the room and a hunter kills it. David runs out of the house and Maggie searches for him. Julia and Barnabas find David's story and speculate if David knows about Chris (who is locked in the mausoleum). David goes to the mausoleum and starts to open the secret panel...

David: You're very pretty Maggie; maybe some day I'll write a story about you.

David: You think that it's weird, don't you Maggie?

Julia: (about Ned) Oh, I never thought we'd be rid of him.

Maggie: (thinking Ned is Jeff Clark) Don't come near me. Why have you come back?

Maggie: An ordinary child might get a little scared but not David Collins.
Ned: Yes, well, he must be very unusual.
Maggie: He is. And when he gets angry he stays angry.

Ned: I haven't been in Collinsport very long but I do know there have been lots of attacks in these woods.

Barnabas: It would hardly be proper of us to leave you here alone.
Ned: Yes, and it is important to be proper in New England, isn't it?
Barnabas: Yes, if one values social acceptance. And perhaps you don't.
Ned: Perhaps I don't.

Dark Shadows - Episode 688 on the IMDb 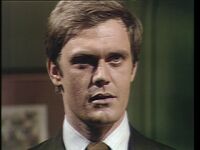 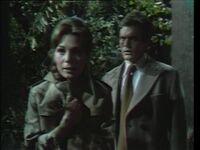 Looking For David
Add a photo to this gallery
Retrieved from "https://darkshadows.fandom.com/wiki/688?oldid=139993"
Community content is available under CC-BY-SA unless otherwise noted.