Chris feels like he is going to transform into the werewolf and has Barnabas lock him in the secret room of the Collins mausoleum.

The night is stormy and terrifying, blemished by the evil touch of one long dead. Somewhere in the shadows that engulf the great house at Collinwood, there exists a spirit of a man whose wickedness stains the pages of Collins family history, a man who has returned from the grave bent upon destruction.

Chris and Carolyn continue their romance, however Carolyn senses a secret that he keeps from her. She summons up her courage and asks if he is married. Chris laughs and assures her that he is single, but fully intends to be married someday.

Later on, Chris feels the transformation coming upon him and has Barnabas lock him in the mausoleum; Barnabas is baffled by this, as there isn't a full moon tonight.

A man named Ned Stuart shows up at Collinwood looking for Chris. Ned finds Barnabas and Julia at Chris's cottage, he tells them that Chris was engaged to his sister and implies that she is dead.

Carolyn: You've been too busy enjoying yourself to worry about your deep, dark secret.

Carolyn: Yes, my mother is a Collins.

Dark Shadows - Episode 687 on the IMDb

Dark Shadows Everyday - Episode 687 - You Remind Me of a Man 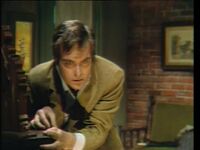 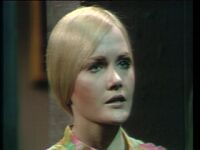 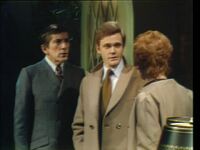 Looking For Chris
Community content is available under CC-BY-SA unless otherwise noted.
Advertisement