Roger returns to Collinwood and is upset that his son has been accused of the strange things occurring recently.

There is a storm over the estate of Collinwood, and as the lightning flashes an ambulance leaves the great house, for this night an aged silversmith arrived with important information, which might give two people a clue to the dangers that threaten them. But now the silversmith is dead, and no one knows how he died.

Barnabas and Julia contemplate what Ezra was going to tell them. David takes the ledger which Ezra brought with him to Collinwood; Beth appears to David, and has him read the information about the silver medallion that Beth Chavez purchased the medallion and charged the cost to the account of Quentin Collins; Quentin makes David rip out a page which contains that crucial information. Roger returns to Collinwood and is upset that his son has been accused of some of the strange things occurring recently. The ledger is later found in the drawing room. Julia finds a picture of Beth in an old family album.

Elizabeth: Roger is very fortunate; he only believes what he sees.

Barnabas: Curious so many hearts should stop in this house.

Julia: Then we're all in danger, aren't we, and there's nothing we can do about it.

David: (about Quentin) I hate him, Beth!

David: You always accuse me!
Barnabas: You always put yourself in a position where I have to.

David: I just knew you and Aunt Elizabeth were going to sit in the car and talk about... Vicki and things.
Roger: I'm sure you know a lot of interesting things that your Aunt Elizabeth does not.

Elizabeth: I'd like to know what's happening in my own house.

Dark Shadows - Episode 686 on the IMDb

Dark Shadows Everyday - Episode 686 - The Case of the Lifted Ledger 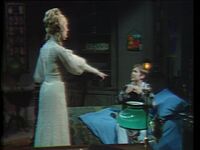 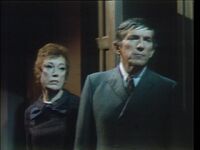 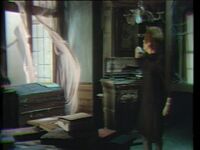 Haunted
Community content is available under CC-BY-SA unless otherwise noted.