Quentin sabotages Barnabas' efforts to learn the history of the silver pentagram.

Night over Collinwood. A night of suspense for Barnabas Collins and Christopher Jennings who have discovered an infant's coffin, and in it, a tiny pentagram used for protection against werewolves. Barnabas, aware that the medallion comes from a shop in Collinwood has asked the jeweler to search his records and find out for whom the pentagram was made.

At his shop, Ezra Braithwaite calls Collinwood and speaks to David. He is very excited and offers to come to Collinwood on his way home. David promises to tell Barnabas, but Quentin takes the phone from his hand and listens in as Braithwaite explains that the medallion was one of the first pieces he ever made, and he will bring the ledger with the purchaser's name on it. David shouts at Quentin that he had no right to take the telephone and Quentin stares at him, sending David off in a panic.

In the drawing room, David questions Quentin about the pentagram and begs him not to hurt anyone, but comes to the realization that he will not get reassurances from Quentin and that he no longer has any choice in the matter. Amy enters the drawing room delighted to see Quentin, who leaves when she arrives. Amy is upset that Quentin never wants to see her and asks what Quentin wants David to do now. She tells David not to trust Quentin, that he is planning to do something bad to Chris and then rushes out of the room, convinced Quentin is still there and listening in on them. David joins her in the foyer, closing the drawing room doors behind him (to keep Quentin's ghost away?). He tells Amy he does not like "the game" anymore. She concurs and asks what they should do. Just then Elizabeth comes down the staircase with a telegram stating that David's father is going to be returning from London tonight and that they barely have time to meet him at the Portland airport and that he would like to make sure David comes to greet him. David exclaims, "Tonight?!" and starts trying to weasel out of going with her, much to Elizabeth's distress. Elizabeth extends an invitation to Amy to join them. David tells her he has a test tomorrow. Elizabeth says she will explain to his private tutor/governess and becomes very annoyed with David as he goes into full panic mode.

Elizabeth accuses David of lying about the test and asks what is really going on. David feigns illness, but Elizabeth detects no signs of fever. Amy tries to get him to tell Elizabeth, but he refuses and runs upstairs. Amy also refuses to tell as the clock strikes, signaling time for Elizabeth to go alone. But before she goes, Elizabeth tries to have a heart-to-heart talk with Amy. She uses her best wide-eyed look and tells Elizabeth she doesn't know what is happening. Elizabeth tells Amy to ask David to wait up for them if he can, then leaves. David comes down the stairs and Amy brings up the fact Quentin's "game" gets them in trouble and wonders what Quentin's mysterious instructions are leading up to. David says he doesn't like Quentin anymore and thinks only Quentin understands what his instructions mean.

Upstairs, in Roger's bedroom, Barnabas packs his bag and prepares to return to the Old House when Amy knocks on the door. She begs him not to leave until... and then breaks off her sentence stating she will miss him. Barnabas reminds her of the good old days at Windcliff Sanitarium, where they met, and tells her he hopes they can have more long talks like they did before she and David became best friends. He tries to get her to open up, but all he gets out of her is that she is afraid of someone, before she clams up. She tells Barnabas she wants to leave Collinwood, to either live with him or Chris, and then rushes into his arms.

Outside, Ezra Braithwaite knocks on the door and David lets him in. They introduce each other and David shows him to the drawing room where Ezra begins to inspect every knick-knack until he locates the silver candlestick. When he changes glasses he explains to David that one pair is to see people and the other to see things. He picks up the candlestick and is delighted that, even at a distance with the wrong glasses, he could recognize his father's craftsmanship. David asks if he can see him. We see David's blurry form through Ezra's eyes, barely discernible. David closes Ezra in the drawing room while he inspects a candy dish, then heads upstairs.

Downstairs Ezra inspects a letter-opener, remarking on its inferior quality when Quentin emerges from the secret panel to the West Wing.

When Quentin sneaks up on Ezra, Ezra can't see him, so Ezra assumes he is a friend of Barnabas' (probably Chris Jennings). He tells him that it was the first piece of silver jewelry he ever made, back when he was fifteen-and-a-half years old. He tells him about the sale to Beth Chavez, but when Quentin does not speak he puts on his other glasses for seeing people. He instantly recognizes Quentin, but then realizes that Quentin has been dead a long time. He shouts "You're dead! You're dead!" as Quentin closes in on him. Upstairs, David finally gets around to telling Barnabas that Mr. Braithwaite is here and they head downstairs, but by now Quentin has taken the ledger with him into the West Wing. When Barnabas and David enter the drawing room, they see Ezra sitting at the desk. When Barnabas touches him, he falls to the floor, dead. David totally freaks out as Barnabas tries to get him to go get Julia.

Amy: Do you swear to me that it has nothing to do with Chris?
David: Yes, I swear, he promised me that it didn't. We just have to believe him.
Amy: Do we?

Ezra: David is it? Well, I don't remember a Collins being named David before. Now, my name is Ezra, as my father was and his father before him. You find a name like Ezra and you don't give it up.
David: I guess not.
Ezra : Yes, now David's kind of a new-fangled name.
David: No, there's King David in the Bible.
Ezra : Oh, of course, yes, yes. A good man, too.

Ezra : You Collins. You have more silver than the shop does.

Ezra: (inspecting a letter opener) No that's not one of ours. They must have picked that up in the city. Though, they would have been better off with us!

Elizabeth: It's nothing that you can't do tomorrow, isn't it?
David: Oh, but it is.

David: (about Quentin) He's doing something here. Something to us all, but what is it?

Amy: This house is so big and gloomy.

Ezra: When you get to my age, you need two of everything.

Dark Shadows - Episode 685 on the IMDb 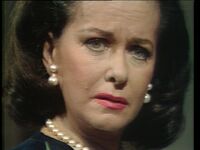 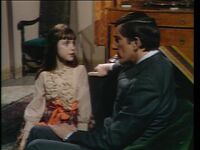 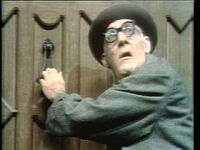 Ezra at Collinwood
Add a photo to this gallery
Retrieved from "https://darkshadows.fandom.com/wiki/685?oldid=143901"
Community content is available under CC-BY-SA unless otherwise noted.