Elizabeth and Maggie become concerned with David's recent behavior, prompting Maggie to follow him into the west wing of Collinwood.

The night which has just ended at the great estate of Collinwood will be remembered by many who live there. A little girl has awakened from a frightening dream, and she suddenly knows that the dream will come true, unless she can stop it.

David hurts Amy while trying to stop her from telling Elizabeth about Quentin. Amy tries to tell Elizabeth, and then is stopped when she sees Quentin. Elizabeth and Maggie become concerned with David's recent behavior. Maggie follows David into the West Wing of Collinwood.

Elizabeth: Disciplining is the only way to make David realize that he's living in a real world inhabited by real people and he has to deal with them, not with witches and ghosts and giants.

Maggie: David, I want to be your friend.
David (turning around with an insincere smile on his face): But we are friends, Maggie.
Maggie: No, David, we're not. Even smiling like that at me doesn't make it so.
David: Vicki never said things like that.
Maggie: Well, Vicki had one way of dealing with you and I have another.

David: Oh, Quentin, you're never gonna let us go, are you?

David (to Maggie): I don't like it when people "deal with me."

Dark Shadows - Episode 679 on the IMDb 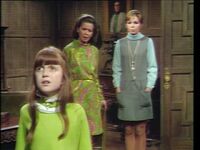 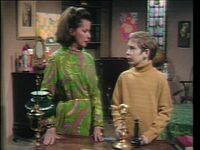 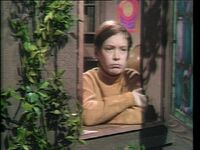