Beth's ghost leads Julia and Barnabas to the cottage where they find Chris dying, having being poisoned by Quentin's ghost.

The dawn of a new day at Collinwood. Most of those who live in the great house are still asleep, but for Barnabas Collins, there can be no sleep until he learns what happened the night before in the family mausoleum at Eagle Hill Cemetery. There, a young man, afflicted by a curse that transforms him from man to beast, has spent the night locked in a secret room.

Barnabas releases Chris from the mausoleum where he spent the night without incident. David visits and distracts Chris while Quentin poisons his drink. Chris believes that the transformation will not occur this evening, however he starts to suffer pain from the poison. The ghost of Beth leads Julia and Barnabas to the Cottage where they find Chris dying.

David: I always get up this early.

David: Aunt Elizabeth is always talking about how important sleep is.

Barnabas: (about the anxiety and tension Chris feels) I understand that.

Chris: You're a good man, Mr. Collins.
Barnabas: There have been those who didn't think so.

Dark Shadows - Episode 677 on the IMDb 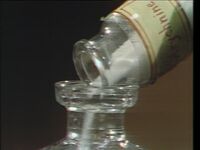 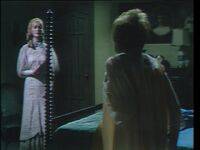 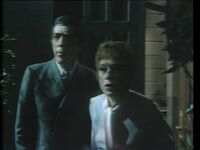