Late afternoon at Collinwood, the great house is peaceful and quiet, and those inside it know nothing of an arrangement being made on another part of the estate.

Barnabas locks Chris in the secret room in the Collins' mausoleum so he will not be able to hurt anyone when he is the werewolf. Mrs. Johnson is increasingly disturbed by the children’s behavior. Quentin wants David to poison Chris, but he refuses to do it.

Barnabas: I wish there was some way I could help you.

Mrs. Johnson: Why are you both staring at me?

Barnabas: (to Amy) You don't seem to be quite yourself tonight.

Dark Shadows - Episode 676 on the IMDb 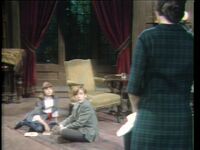 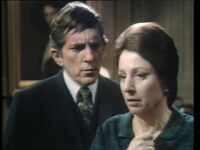 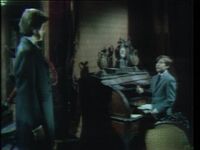 Ghostly Orders
Add a photo to this gallery
Retrieved from "https://darkshadows.fandom.com/wiki/676?oldid=144806"
Community content is available under CC-BY-SA unless otherwise noted.