Barnabas begins to suspect that Chris is the werewolf.

A strange, windless day on the great estate of Collinwood, after another night of horror, a night where the moon shone full and the wolf who walks as a man attacked again. And in the morning light, a ghost weeps over it, and sends an innocent girl on a mission she cannot understand.

Barnabas explains to Julia that he finally knows why Chris lied and why he was so anxious to leave the night before. Barnabas has done some reading on werewolves and is now convinced that Chris Jennings is a werewolf. Carolyn shows a friend, Donna Friedlander, around Collinwood. Donna takes a liking to Chris and tries to get a ride from him back to Bangor. Chris turns into the werewolf and kills her.

Barnabas: A man who when the moon is full becomes a wolf. The moon will be full and the man will become a wolf again.

Donna: (referring to Portrait of Barnabas at Collinwood) You had to have posed for it.
Barnabas: If I did, think about how old that would make me.

Chris: In the morning, I'll be a new man.

Donna: (to Chris) I should have known why I was attracted to you... I mean... you're crazy.

Dark Shadows - Episode 674 on the IMDb 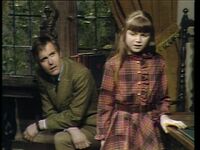 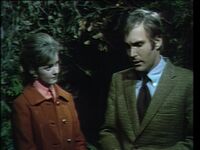 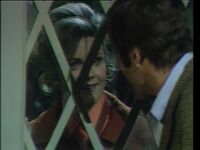 Donna at the Door
Community content is available under CC-BY-SA unless otherwise noted.
Advertisement