Barnabas chases the werewolf off with his silver headed cane.

This night has already brought terror to Collinwood, for a young girl was stalked and attacked by a strange, savage creature, and she barely managed to escape with her life. She is safe now, but the terrors of this moonlit night have not ended, for Barnabas Collins has left Collinwood on a dangerous mission, to hunt down and destroy the creature that moves through the darkness with one desire: to kill.

The bullets appear to have little effect on the werewolf; Barnabas chases it off with his silver headed cane. Barnabas visits Chris telling him that the "wild animal" attacked Carolyn, Chris says that he was sleeping in the cottage all night. Julia suspects that Chris is hiding something. Beth instructs Amy to burn the shirt that Chris was wearing which now has bullet holes and bloodstains.

Julia: Chris is lying he didn't have a pleasant night sleep i doubt he had any sleep at all.

Dark Shadows - Episode 673 on the IMDb 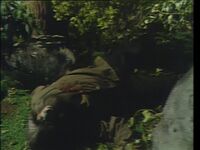 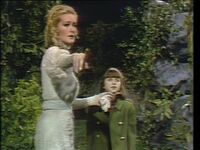 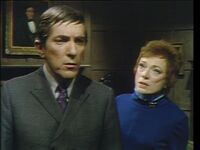 Barnabas & Julia
Add a photo to this gallery
Retrieved from "https://darkshadows.fandom.com/wiki/673?oldid=136415"
Community content is available under CC-BY-SA unless otherwise noted.