The great halls of Collinwood are clothed in darkness, a darkness sinister and impenetrable, but not as impenetrable as the secrets of the great estate. For Elizabeth Collins Stoddard, the mistress of Collinwood, has been placed under a curse and because of it has been buried alive. At this moment, she realizes her daughter is in danger, but she is trapped in her tomb, consigned to the land of the living dead.

The werewolf traps Carolyn in Elizabeth's mausoleum; Elizabeth is able to push a button in her coffin, which causes bells to ring. Barnabas and Julia goes to the mausoleum and saves Carolyn. Julia examines Elizabeth and proclaims that she is still dead. Later Elizabeth shows up at Collinwood and tells everyone how Cassandra put her under a spell. Barnabas shoots the werewolf.

Elizabeth: This house. I never thought I'd see it or any of you ever again.

Dark Shadows - Episode 672 on the IMDb 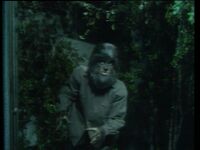 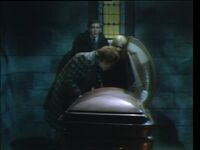 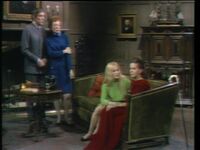 Elizabeth tells all
Community content is available under CC-BY-SA unless otherwise noted.
Advertisement