Carolyn goes to confront Chris about his lack of concern for Amy; meanwhile, Elizabeth, who continues to lie in her coffin unable to speak while everyone thinks she is dead, tries to warn Carolyn that she is in danger.

A late afternoon sun sets slowly over the great house at Collinwood, and soon an evil game of life and death will be resumed. No one fears the approaching darkness more than a young man who lives in the small cottage on the estate. For he alone knows that with the coming of the full moon he will experience a painful and hideous transformation from man to predatory animal.

Maggie urges Chris to come to Collinwood to see Amy. Chris lies to Maggie, saying he'll be right there, so that Maggie will leave him alone. Back at Collinwood, Maggie tells Carolyn that Chris was very rude and acted as if he couldn't wait to get rid of her. Carolyn mentions Chris was acting strange earlier, then tells Maggie that she suspects David and Amy are up to something, now that Amy seems to have made a full recovery. Carolyn prepares to leave to visit the mausoleum, and Maggie asks her if she still believes her mother might not be dead.

Back at the cottage, Chris turns into the werewolf, attacks some furniture and runs off into the woods. At the mausoleum, Carolyn gets upset, hoping for her mother to somehow come back from the dead. In the coffin, Elizabeth is still alive but unable to speak out, though she wishes she could tell Carolyn that she's in terrible danger. The werewolf stalks the woods. At Collinwood, Maggie interrogates David and Amy about their knowing looks, and asks Amy directly if she faked fainting. Carolyn returns, upset to know that Chris hasn't shown up, and that it's too late to keep the children up waiting. Maggie decides to send the children to bed. The werewolf continues to stalk the woods.

At Collinwood, Carolyn paces while waiting for Chris. She asks Maggie to call him at the cottage, but there's no answer. Carolyn grabs her coat, intent on going to the cottage to find him. Elizabeth, still in her coffin, unable to move or speak, wishes she could somehow warn Carolyn of the imminent danger in the woods. At Collinwood, Amy sneaks into the drawing room through the hidden passage, but is stopped at the doors by David, who claims to have heard her leave her room and go to the west wing. He convinces her to go back to her room, and they both leave through the hidden passage. Carolyn arrives at the cottage, sees the broken furniture, but cannot find Chris, so she leaves. While Carolyn is in the woods, Elizabeth speaks to her telepathically, urging her to return home, as she is in terrible danger.

David: You know how girls are, they're always having dizzy spells.

Maggie: I don't want my questions to be answered with another question.

Maggie: Carolyn, it's not possible for someone to come back from the dead.

Dark Shadows - Episode 671 on the IMDb

Dark Shadows Everyday - Episode 671 - The Phone Book of the Dead 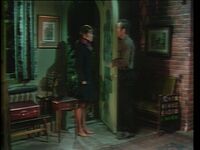 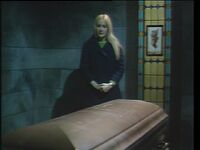 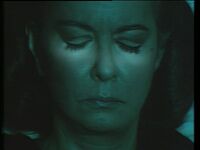