David and Amy lock Mrs. Johnson in the cottage and Quentin's ghost appears to her.

A late afternoon sun shines over the Collins estate, and an aura of peace and quiet prevails within the great house. But the unseen terror of another night is not far off. Two children, possessed by evil spirits, wait for an opportunity to play a frightening and possibly deadly game. That opportunity will come sooner than they think.

Mrs. Johnson: I’d like to meet the man that invented supermarkets, and wring his neck.

David: Mrs. Johnson, you're okay now, you're back at Collinwood.
Amy: No one can hurt you here.

Dark Shadows - Episode 669 on the IMDb 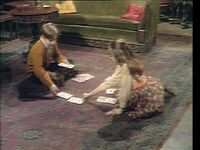 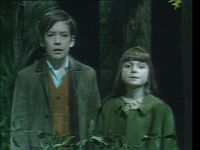 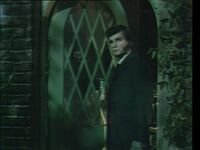