Night at Collinwood. A night that appears to be quiet and serene, but unknown to the residents of the great house there is terror in this night, for the spirits of those long dead still exist within its walls, and they have made contact with the living. Two innocent children have become possessed, and as a result they will be compelled to destroy. Unwittingly, they will place every member of the Collins family in great danger.

Amy sneaks into David's room and he reiterates that they're going to play the game with Carolyn.

Amy asks why and David tells her that Quentin wants it because Carolyn knows too much. Amy protests that she likes Carolyn, but David insists. Just then, Maggie comes in and says she heard them talking, David tries to deny that Amy's there, but she doesn't buy it, and eventually Amy reveals herself. They convince Maggie that Amy had a dream that David was dead and came to see him, since everyone she cares about has died. Maggie covers for them when Mrs. Johnson comes to the door, and then tells them she'll come back to take Amy to her room. David tells Amy to go get dressed because they're going to play the game with Carolyn tonight.

Outside, Carolyn comes home with Chris and asks him to come live in their guest cottage. He's initially reluctant, but after he finds out it's fairly isolated, accepts. She then pretty much corners him into kissing her.

Later, after dodging Carolyn and Chris inside the foyer, David and Amy sneak down to the servants' quarters dressed in old-fashioned clothing and start role-playing Quentin and Beth. They have a cryptic dialogue in which Beth says she's afraid of "them," and Quentin says he hates "her" and doesn't believe in "her" curse. He says he will finish it, when Mrs. Johnson walks in on them and shoos them off to their room. She finds Maggie and relates what she saw, saying that the children have changed, and she is afraid of them.

Back in David's room again, Amy says she doesn't feel like Beth any more, but David belligerently tells her that when they're wearing those clothes, she's Beth and he's Quentin. He says something will happen to Mrs. Johnson, and when Amy asks "what," responds "you'll see..."

Amy: Maggie's nice. I like her.
David: I like her too.
Amy: We won't play the game with Maggie.
David: No not her.
Amy: I wouldn't want anything bad to happen to her.

Carolyn: (about Amy) I'm beginning to worry if David is a good influence on her.

Mrs. Johnson: David likes to prowl around the house in the middle of the night. Maggie, there's something peculiar about those children.

Dark Shadows - Episode 668 on the IMDb 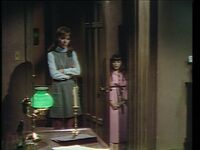 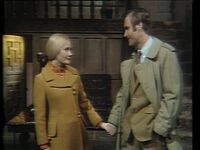 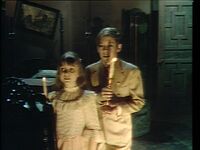 Playing Dress Up
Add a photo to this gallery
Retrieved from "https://darkshadows.fandom.com/wiki/668?oldid=143793"
Community content is available under CC-BY-SA unless otherwise noted.