Willie and Julia release Barnabas from the coffin, however they are almost discovered when Amy and Carolyn visit the Collins mausoleum to put flowers on the graves.

The pale light of early morning illuminates the walls of Collinwood, and the great house appears to be serene and peaceful. But elsewhere on the great estate, two people have just lived through a night of terror. For unseen forces carry Barnabas Collins back to the past on a desperate mission. That mission has been accomplished. But he has not yet returned to the present. On this day his fate will be decided, and a new reign of destruction, quite unexpectedly, will begin.

Willie and Julia release Barnabas from the coffin, but they're almost discovered when Amy and Carolyn visit the Mausoleum to put flowers on the graves. David hurts Amy when she will not do what Quentin wants them to; Carolyn punishes David. David later tells Amy that they are going to "play the game" with Carolyn.

David: What are you going to do, spank me?

Carolyn: You don't mean a word you're saying.

David: The idea of leaving Collinwood scares me.

Dark Shadows - Episode 667 on the IMDb 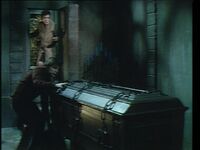 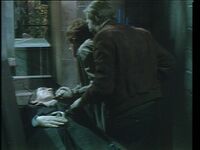 David Possessed
Add a photo to this gallery
Retrieved from "https://darkshadows.fandom.com/wiki/667?oldid=142682"
Community content is available under CC-BY-SA unless otherwise noted.