In the present day, Julia and Willie see the ghost of Josette Collins.

The pale light of early morning illuminates the walls of Collinwood. Another dawn has come, but this is not the Collinwood of the present, but the Collinwood of centuries past. For Barnabas Collins has returned to the year 1796 to save Victoria Winters. He has succeeded, but now he must find a way to travel, once again, though time and space to the present. There are those in the present who are waiting, who will attempt to draw him back. But they do not know the dangers he faces in this morning. They do not know that his return to the past may result in his own destruction.

Ben kills Nathan and Natalie before they can harm Barnabas. In the present Willie and Julia wait for Barnabas to return, however he never does. Willie checks the mausoleum but Barnabas is not in the coffin; shortly after Willie leaves the chains re-appear around the coffin and Barnabas is trapped inside. Josette appears to Willie, crying; he is convinced that Barnabas is in the coffin now.

Ben: (about Nathan) He never did nothing but harm to the Collins family.

Willie: Too many weird things are happening, too many things that can't be explained.

Dark Shadows - Episode 666 on the IMDb 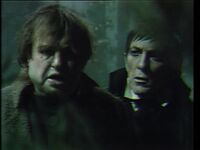 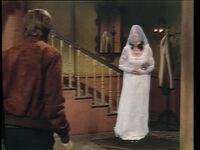 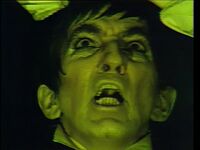 Entombed
Add a photo to this gallery
Retrieved from "https://darkshadows.fandom.com/wiki/666?oldid=139507"
Community content is available under CC-BY-SA unless otherwise noted.