Angelique agrees to help save Victoria if Barnabas agrees to resume their marriage.

Night at Collinwood, but this is not Collinwood as it exists in the present. It is the Collinwood of 1796. For Barnabas Collins has been drawn back into the past. Forces from beyond the grave have brought him here to save the life of Victoria Winters. Today he will succeed or fail. In returning to the past he has had to pay a penalty. He has become what he was, and as a consequence he must endure wave upon wave of terror. Terror that will seemingly never end.

Barnabas tells Ben of Crystal's body and he agrees to help him dispose of it. When they return to the study they find Angelique in her place. Angelique reveals that she has been sent back to the past as a punishment for her behavior in the future. She offers to help Barnabas save Victoria, on the condition that he remain in the past with her. He reluctantly agrees.

At the jail Victoria and Peter discuss their past. Victoria tries to tell him how she already lived through this once before, but Peter doesn't understand. Barnabas arrives and tells them that Victoria can be saved, if she remains calm and follows his instructions. She agrees. He tells her that she must go to the gallows and not panic. She doesn't seem to quite believe him, but the jailors come to take her away. She and Peter kiss passionately and he pledges his undying love for her. He swears that he will find her somehow.

Barnabas confides his plan to Peter. Peter doesn't believe that Angelique would be willing to help Victoria, but Barnabas insists that she has agreed to it. Her plan is to have Victoria collapse at the gallows and appear dead, then be revived at Collinwood. However, when Victoria is led to the gallows there is no sign of Angelique. Victoria is hanged.

Angelique: I must remain in this century now, as a punishment for the mistakes I made in the past. Mistakes I will never make again.

Angelique: It is true that I never was very fond of Miss Winters.

Barnabas: Can I trust you?
Angelique: Can you save Victoria Winters alone? Then you have no choice. You must trust me.

Angelique: You made a wise decision, Barnabas. One you should have made many years ago, when we first met.

Ben: You're a fool to trust her.
Barnabas: I know her better than you do.

Barnabas: If I don't save Victoria Winters, then I don't know what will happen.

Dark Shadows - Episode 664 on the IMDb 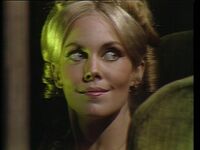 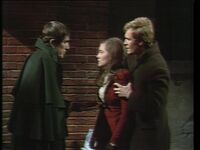 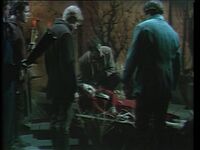 Victoria Hanged
Add a photo to this gallery
Retrieved from "https://darkshadows.fandom.com/wiki/664?oldid=143858"
Community content is available under CC-BY-SA unless otherwise noted.