Barnabas bites Nathan then forces him to write a confession that he lied in his testimony at Victoria's trial.

The secrets of time and space are no longer a mystery to one man at Collinwood. Barnabas Collins has known this house for almost 200 years. Now he has gone back to it as it was in the year 1796. He has embarked on a daring and dangerous plan to change the events of one twenty-four hour period in history.

Instead of killing Forbes, Barnabas throttles him and instructs him to recant his testimony against Victoria Winters. He and Ben lead him out of the house, and Millicent follows them. The confession from Nathan clears Peter, but isn't enough for Victoria. Millicent visits Nathan in jail, and he begs for her to listen and understand him. She sadly observes that she always understood him, and yet she is still willing to listen.

Barnabas meets a streetwalker named Crystal. She tries to talk him into taking her to the Eagle for drinks, but he wishes to remain outside. She suddenly recognizes Barnabas Collins. He bears his fangs, and she jumps off the dock.

At the jail, Nathan tells Millicent how to destroy Barnabas. She is shaken from the instructions, but tells her husband that she will try. She leaves and Nathan shakes his head after her, certain that this last effort will be in vain.

Barnabas returns to Collinwood, where he tells Ben how hard it is to be a vampire once again. Ben asks him how they are going to save Victoria Winters and Barnabas confesses that he does not know. He goes alone into the study, and finds the body of Crystal Cabot.

Barnabas: You've shown more ingenuity than I have given you credit for.

Nathan: If you need my help that desperately, then you can't afford to kill me.

Nathan: Barnabas must be destroyed before it's too late.

Nathan: You've just got to take my word, Millicent. You've got to trust me.
Millicent: I did that before, Nathan. I trusted you. And I was sorry.

Dark Shadows - Episode 663 on the IMDb

Dark Shadows Every Day - Episode 663 - Being This Way Again 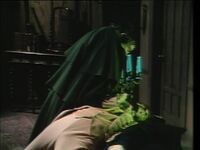 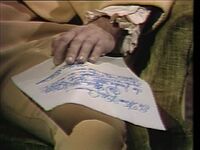 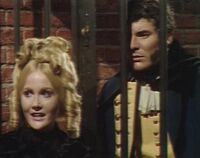 Millicent visits Nathan
Add a photo to this gallery
Retrieved from "https://darkshadows.fandom.com/wiki/663?oldid=137026"
Community content is available under CC-BY-SA unless otherwise noted.