Back in 1796, Barnabas plans to change the course of history by saving Victoria.

The night holds many terrors for those who live at Collinwood. On this night, Barnabas Collins will experience a kind of terror he has never known before. For he has successfully transcended the barriers of time and space and returned to the 18th century, to relive and attempt to change one twenty-four hour period in history.

Barnabas finds himself returned to the past. Ben Stokes arrives and Barnabas questions him to make sure that he has returned on the night he intended. His questions worry Ben, but Barnabas assures him that he is quite well. He asks Ben to tell his father that he has gone to Bangor in pursuit of Forbes. Ben tells him his father will go after him, and Barnabas says this is exactly what he wishes. He then leaves Ben and searches for Nathan Forbes.

Forbes is drinking at the Eagle, and is startled when Barnabas appears to him. Barnabas again delivers the news of his mother's suicide and places the blame on him. Forbes fires his pistol at Barnabas, but again it has no effect. Barnabas changes what he says to Forbes, he says that he will meet him at 9 o'clock, and if he will do as he instructs, he may let him live.

Victoria is alone in her cell when Barnabas arrives. She is quiet and accepting of her fate. Barnabas tells her that he came back to help her. She tells him that she is in love with someone else. Barnabas surprises her by stating that he already knows all about Peter Bradford. He wants to help her anyway.

Victoria tells him that she returned to her time in the future for awhile, but came back because she couldn't live without Peter. Barnabas promises her that before the sun rises, she and Peter will both be free.

Nathan arrives at Collinwood, frantic with fear. As Joshua has left the house in pursuit of Barnabas, it is Ben who tells Nathan of Barnabas's curse. Nathan believes him and wonders how he can save himself. Ben tells him that he can be of no help. Nathan accuses him of helping a murderer, and Ben recounts the time he tried to stop Barnabas. He tells Nathan of the one way a vampire can be destroyed.

Nathan again takes the crossbow and waits for Barnabas to enter. However, when the clock chimes nine the door opens, but Barnabas does not come in. Instead he hides himself from Forbes, and attacks him from behind.

Barnabas: I'm going to change the course of history.
Ben: I don't understand a word you're saying.
Barnabas: I don't suppose you'd understand, even if I explained it to you.

Barnabas: And one other thing - Forbes will be back here within the hour.
Ben: How do you know that?
Barnabas: Never mind; I just know. And when he gets to the... the house make sure he goes into the den. Do you understand?
Ben: I understand, I just hope you know what you're doing.

Barnabas: I have returned.
Victoria: No, it's impossible. You're, you're dead!

Victoria: I came back here to be with the man I love, in death.
Barnabas: Wouldn't you rather be with him in life?

Ben: (to Nathan) What have you got up your sleeve?

Dark Shadows - Episode 662 on the IMDb

Dark Shadows Every Day - Episode 662 - This is the Night 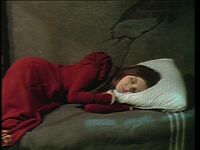 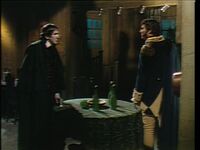 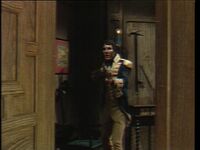 Nathan Confused
Add a photo to this gallery
Retrieved from "https://darkshadows.fandom.com/wiki/662?oldid=141093"
Community content is available under CC-BY-SA unless otherwise noted.