Barnabas tells Julia about the events of the night of Victoria's hanging, then disappears into the past.

On this night an incident in the long dead past has intruded on the present. Barnabas Collins has learned of a hanging that occurred in the year 1796.

At Eagle Hill Cemetery, Barnabas and Julia have found the grave of Victoria Winters, who was “hanged as a witch” in 1796. Barnabas is determined he needs to travel to the past to stop Vicki's death, but Julia tells him that she went back before, and escaped. Barnabas reasons that because this time there was no one in the 20th century to take her place and the tombstone is the proof. Julia asks what happened on the night Vicki was hanged. Barnabas tells the story of Naomi Collins suicide and his plan to take revenge on Nathan Forbes as a flashback. He begins when Joshua Collins arrived in the Drawing room and told him that Naomi was dead.

Continuing his story, Barnabas recalls Joshua's plan to destroy Barnabas to end the curse. Joshua has discovered that a silver bullet fired to the heart will destroy a vampire instantly and he has arranged to have six silver bullets made. Barnabas agrees it is for the best, but first he wants to kill Lt. Forbes. Joshua tries to talk Barnabas out of it, but Barnabas is determined. Barnabas tells Julia how he found Forbes at The Eagle. Barnabas tells Forbes that he is responsible for Naomi's death, about his attempt to kill Daniel and his attempts to drive Millicent insane. Nathan pulls a gun on Barnabas and shoots. Barnabas, unhurt, tells Forbes he is already dead and then disappears after telling him he will die when the clock strikes 9pm.

Forbes runs to Joshua and tells him he tried to kill Barnabas. Joshua tells him that Barnabas is a vampire, placed under a curse and he is surprised Forbes is still alive. Forbes begs him to force Barnabas to stop, but Joshua tells him he has already asked Barnabas to stop, only because he does not want more bloodshed. He then excuses himself as he does not want to be there when Barnabas kills again. Forbes confronts Ben who tells him how he can kill Barnabas. Nathan tries to run away, but hears the dogs howling, which Ben tells him is a sign Barnabas is near. Forbes goes back to Joshua in his study at 8:56pm and there he sees a crossbow on the wall. He asks Joshua to leave and gets the crossbow ready. Barnabas enters Collinwood, unaware of Forbes' plan. Barnabas enters the study and sees the crossbow, too late. Nathan fires a shot into Barnabas' chest, missing the heart. Barnabas kills Forbes.

Barnabas continues his story, telling her that after Forbes was dead he and Joshua planned his destruction. Barnabas asks his father for two things: to free Ben Stokes and to stop Victoria's execution. Joshua agrees to the first and tells Barnabas he will write to the Governor and try to get him for a stay of execution and a new trial. Joshua attempts to tell Barnabas he loves him, but Barnabas stops him, fearful that it will make his father weaken. He tells Julia that he does not know what happened, but he must have told Ben to place the chains around his coffin. He tells her he stayed there in the coffin until Willie Loomis freed him. He tells Julia he should have not killed Forbes, and this time he will make Forbes recant his testimony. Julia tells him even if he could travel back he could not control anything, that Forbes could have better aim and that if he changes anything in the past it could set off a chain reaction that destroys him. She also points out he will be a vampire when he returns to 1796 and he may still remain a vampire when he does return to the present day.

He tells Julia to leave and return in 48 hours and then starts an incantation to Peter Bradford. When he finishes he turns around to see Julia and the gravestones of Peter Bradford and Victoria Winters fade away. He turns around wearing his cloak from 1796 and bares his fangs.

Barnabas: (to Julia) It was the most tragic night I have ever experienced. It all began when my mother discovered my coffin...

Barnabas: (to Nathan) I cannot die because I am already dead. Do I frighten you Forbes? I do not plan to kill you, at least not here, now. Later Forbes, after you've had time to think about it. Nine o'clock. When the clock strikes nine, you will die.

Joshua: (to Nathan) He blames Mrs. Collins' death on you, as do I.

Joshua: (to Nathan) I almost feel sorry for you.

Dark Shadows - Episode 661 on the IMDb 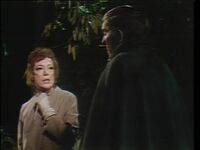 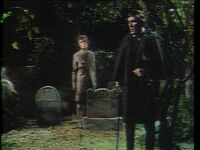 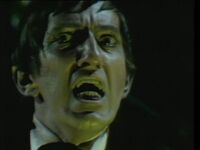 A Vampire's Return
Add a photo to this gallery
Retrieved from "https://darkshadows.fandom.com/wiki/661?oldid=138645"
Community content is available under CC-BY-SA unless otherwise noted.