Barnabas decides he has to find a way to travel back to 1796 to save Victoria from the gallows.

The great estate of Collinwood on a solemn afternoon, an afternoon in which even grief is momentarily forgotten. Forgotten because of a seemingly innocent photograph posed by two adults for the children. When the film developed the picture showed not only the people, but something one man knows happened over two-hundred years ago.

Barnabas realizes that the photograph is Victoria's way of communicating with him. He is convinced that she needs his help, and he tells Julia that he will find a way to go back in time and save her. He tells David and Amy that their trip to Boston must be postponed.

Sad that their trip has been cancelled the children go out to play. At the cemetery, Amy asks David if he watches the funerals there. He laughs and tells her that there aren't any funerals held there any more. Just then Amy discovers a freshly dug grave. The headstone next to it reads "Peter Bradford." David recognizes the name, but he can't place it.

Barnabas: She went back to be with Peter, and that gives me pain enough, but to think that she must relive those dreadful days in that primitive cell, on trial as a witch... When it happened the first time there was nothing I could do to save her, but now I will!

Barnabas: I will find the secret to time. I will banish all those years between then and now, and I will be with Vicki at her side tonight.

Barnabas: I escaped. And I can thank Angelique for that.

Julia: Look at me, I'm talking about travelling back 200 years as if it were as easy as flying to Europe.

Julia: Barnabas, please don't go back to the past! Please! Please!

David: I know every grave in here.

Dark Shadows - Episode 660 on the IMDb 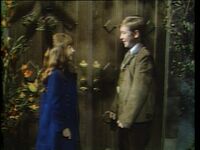 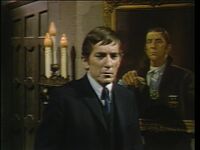 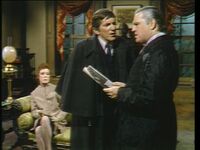 Calling upon Stokes
Add a photo to this gallery
Retrieved from "https://darkshadows.fandom.com/wiki/660?oldid=138644"
Community content is available under CC-BY-SA unless otherwise noted.