When David develops a photograph of Barnabas and Carolyn, Victoria being hung can be seen in the background.

The morning of a new day at Collinwood. Plans have been made to take two children away on a extended trip. But there are unseen and evil forces at work within the great house. Forces that have possessed both children and decreed that they shall never leave Collinwood.

Julia tells Barnabas about Joe's nervous breakdown. Barnabas tells Julia about Victoria's 'message' from the past. Julia has doubts.

Carolyn visits her mother's tomb, wondering if she might still be alive, but sadly accepting the facts. Barnabas tries to comfort her, and tells her that he promised Roger that he would look after everyone while he was away. Carolyn appreciates his sympathy, but insists that she does not need looking after.

The children are surprised that they're still going to Boston. David asks Carolyn if he can take a picture of her and Barnabas to take away with them, and she agrees. David takes the picture and he and Amy develop it together. In the dark room they discover something strange about the picture - an image that shouldn't be there has appeared. Amy wonders if Quentin caused it.

Amy tries to contact Quentin over the telephone, but is seen by Harry Johnson. Harry suspects the two are up to some sort of mischief. David decides to tell Harry the truth about Quentin. As they expected, Harry doesn't believe them.

The kids give Barnabas the copy of the picture he wanted, where he sees Victoria, hanging. He proclaims that he will save her.

Barnabas: I have reason to believe that Vicki needs me.
Julia: You refuse to give up on her.

Amy: Can't you tell when someone is just pretending?
Harry: Well, if you were just pretending, then why did you look so guilty when I first came in?
David: You don't believe us, do you? You think we're just making this up?
Harry: What gave you your first clue?

Dark Shadows - Episode 659 on the IMDb 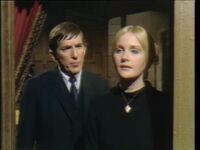 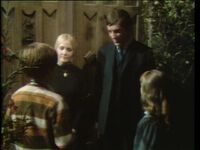 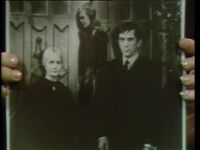 The Photograph
Add a photo to this gallery
Retrieved from "https://darkshadows.fandom.com/wiki/659?oldid=143883"
Community content is available under CC-BY-SA unless otherwise noted.