Joe goes insane and is sent to Windcliff Sanitarium by Julia.

On this night, not far away from the great house of Collinwood one man will live through the most hideous terror that exists, the terror of madness. For he has witnessed something so monstrous, that he may dwell forever in the dark and frightening realm of insanity.

Julia calls Chris from the Collinsport jail, to tell him that Joe has just been picked up by the police. Chris is worried about what Joe may have said, but Joe has been ranting incoherently about protecting Amy. Chris seems to terrify Joe. Joe tells Chris he'll kill him and that he still has the gun. Julia sedates Joe.

Joe has a frightening dream: Chris begs Joe to shoot him when "it" happens, then Chris transforms; Joe teleports to Collinwood, looking for Amy, where the werewolf leaps at him from atop the steps; at Collinwood, Julia says "there’s no werewolf there," and tries to poke his arm; he teleports to the cemetery, where he meets 'Chris'. It's actually Tom, who reminds Joe he could never tell the twins apart. After Joe tells him he’s dead, Tom retorts that he’s alive, but only at night. Tom bares his fangs and approaches Joe, who runs out and begins screaming and is then cornered by the werewolf.

When Joe awakens, he's in a straitjacket. Julia makes plans to take him to Windcliff. Chris decides to stay with his cousin until the time comes. Julia tells Chris that there was nothing he could do to prevent this.

Joe: Amy, she... she loves everybody. Why doesn't anything good ever happen to her?

Dark Shadows - Episode 658 on the IMDb

Dark Shadows Everyday - Episode 658 - Did He Fall, or Was He Pushed? 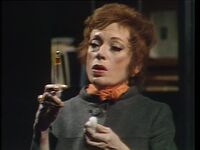 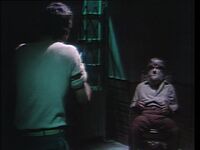 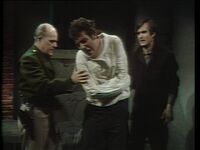