Barnabas plans to carry out Elizabeth's wishes to be buried in a special casket and mausoleum.

Morning at Collinwood, but there is no joy in this morning. For the mistress of the great house died on the previous night. There is considerable mystery surrounding her death, mystery that can only increase before its ultimate resolution. And at this moment two innocent children are about to be drawn tighter into a web of terror neither can understand.

Barnabas tells Mrs. Johnson of Elizabeth's wishes for a private burial. Mr. Jarrett arrives from the funeral home, offering his services. Barnabas is at a loss as to who notified him of Elizabeth's death. Upstairs David and Amy try to reach Quentin, and tell him that they contacted the funeral director, per his instructions. Barnabas makes plans to send the children away to Boston for awhile, and perhaps even enroll them in a school there.

Mrs. Johnson and Maggie pack up Victoria's possessions. As Barnabas is the acting head of the family, they ask him what to do with Victoria's clothes. He says to burn them, destroy them, or give them away - he does not care as long as they are gone. Mrs. Johnson finds the music box and remembers that Barnabas gave it to Victoria. She asks him if he wants it back, but he declines.

Mrs. Johnson: Vicki Winters would have known what to do.
Barnabas: Mrs. Johnson, that's not fair to Maggie.

Maggie: It will help me take my mind off a lot of things I want to forget.

Barnabas: (in Victoria's room) Get rid of everything.

Mrs. Johnson: This house is cursed and everyone who's under its roof. I'm glad the children will be leaving.

Dark Shadows - Episode 656 on the IMDb 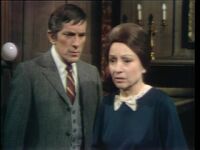 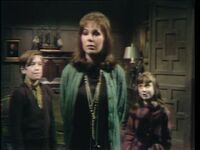 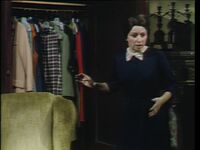 Victoria's Clothes Return
Add a photo to this gallery
Retrieved from "https://darkshadows.fandom.com/wiki/656?oldid=143882"
Community content is available under CC-BY-SA unless otherwise noted.