Elizabeth has a dream in which Cassandra warns her that she will be buried alive; she later appears to die, however she is not.

The second night of a full moon shining over the great house of Collinwood, a night marked for tragedy. For in the village one man has watched his cousin turn from a human being into a mad vicious animal, an animal that only the night before tried to kill him. And having escaped, he has only one thing he must do. The shock and horror have robbed him of his reason and sent him on a mad mission, which must necessarily end in disaster, perhaps for more people than anyone realizes.

Carolyn has returned home and is quite distraught over Victoria's disappearance and her mother's condition. She asks Julia if anything can be done, and Julia does her best to explain Elizabeth's preoccupation with death. Meanwhile Joe sneaks into Collinwood, obsessed by what he has witnessed. He finds Amy and impulsively decides to take her away, to save her from the curses that befell her brothers.

Joe and Amy are eventually found by Julia. Amy is frightened of Joe's rambling and runs upstairs. Joe tries to follow her, but Julia stops him. She tells him that if he can explain himself she might let him take her. He tries, but is unable to say anything except "the animal!" He starts giggling hysterically and Julia slaps him to bring him to his senses. It works, but they are interrupted by a loud scream from upstairs.

Julia rushes to find Carolyn screaming, as she has discovered her mother - dead.

Carolyn: My mother, is there anything anyone can do for her?
Julia: Do you want me to answer that as a doctor?

Carolyn: You think she's going to die.
Julia: No, she thinks she is. That's more the point.

Carolyn: What am I going to tell my mother?
Julia: Lie to her.

Cassandra: You must know of my powers by now, Mrs. Stoddard.

Elizabeth: You did this!
Cassandra: Oh, you give me too much credit. 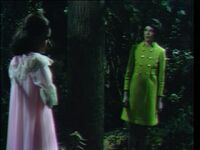 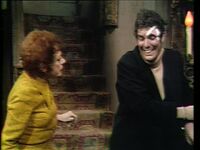 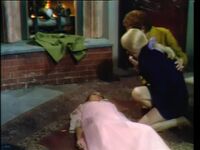 Elizabeth's Curse
Add a photo to this gallery
Retrieved from "https://darkshadows.fandom.com/wiki/655?oldid=111691"
Community content is available under CC-BY-SA unless otherwise noted.