Joe realizes that Chris is the werewolf, and his cousin begs to be killed when he transforms again.

A full moon shines over Collinwood, an ill-omened moon for all who live in the great house, and for others too. For the moon changes one tortured man into an animal who only knows to kill. And on this night, that animal has found a new victim.

Joe goes to the Evans cottage to retrieve some things for Maggie. While he is there, the werewolf breaks into the house and attacks him. Joe manages to defend himself with a pair of scissors. Back at Collinwood, Maggie expresses her fear of being rejected by David. Julia tries to reassure her.

Joe finally tracks down Chris and demands an explanation for his strange behavior. With the moon quickly rising, Chris begs his cousin to leave the room. Joe insists on staying. As the pain of the transformation starts, Chris gives Joe his pistol, and asks him to shoot when the time is right. Joe watches in horror as his cousin transforms into the werewolf, and fires five shots at him. The werewolf staggers, but regains his strength and lunges towards him.

Julia: I'd go to sleep very early if I were you. Those children get up very early.

Maggie: David was so attached to Vicki. He might resent me.

Maggie: (to Joe) We keep causing each other trouble.

Maggie: (at the Evans cottage) It's taken something like this to make me realize my life here is over... Ever since Pop died my future has been something that I've just waited for.

Maggie: All of a sudden I'm beginning that new life that I knew I would have to begin. I'm glad.
Julia: We'll all be happy to have you with us at Collinwood.

Dark Shadows - Episode 654 on the IMDb 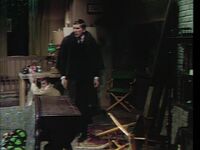 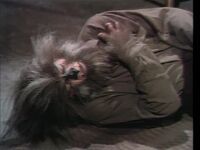 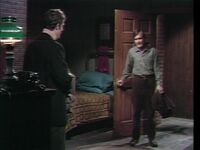 Joe confronts Chris
Add a photo to this gallery
Retrieved from "https://darkshadows.fandom.com/wiki/654?oldid=135954"
Community content is available under CC-BY-SA unless otherwise noted.