Start a Wiki
Elizabeth hires Maggie to be the governess to David and Amy.

A dark and sinister night at Collinwood. A sudden, strange disappearance of a young woman has led to a chain reaction of terrifying events. Found unconscious near the old family mausoleum, the mistress of Collinwood has again become the victim of an evil spell which she thought she had overcome. A spell which could end her life at any moment.

Elizabeth decides to hire Maggie as David and Amy's new governess. Joe goes to visit Maggie and they officially end their relationship, but part as friends. Barnabas talks to Amy about what she is afraid of. Amy says she is afraid of the moon, and she does not know why. Barnabas tells Joe and Maggie that Victoria has vanished. Amy sees the pentagram on Joe’s face again. Amy begs Joe not to go into town. Joe hears growling and is attacked by the werewolf in the Cottage.

Maggie: Joe, the past is dead. I want it to be forgotten.
Joe: Well it's not so easy for me to forget it, I made life pretty miserable for you for awhile.

Barnabas: Why are you afraid?
Amy: I don't know.

Joe: I wanted us to part good friends.
Maggie: We are, Joe. We always will be.

Amy: I'm afraid of the moon, Barnabas, and I don't know why!

Dark Shadows - Episode 652 on the IMDb 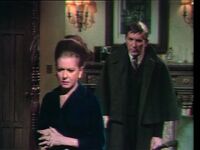 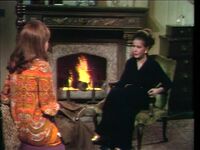 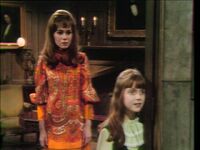 Maggie & Amy
Add a photo to this gallery
Retrieved from "https://darkshadows.fandom.com/wiki/652/653?oldid=142670"
Community content is available under CC-BY-SA unless otherwise noted.