Peter returns from the past and takes Victoria with him while Elizabeth and Barnabas watch.

Evening settles over Collinwood after a day of fear for the residents of the great house. For on the previous night a woman died mysteriously. And the mystery surrounding her death still troubles those who knew her. On this night another event will take place, an event just as mysterious, one which will change the destiny of Victoria Winters forever.

Elizabeth and Roger discuss Ms. Findley's death briefly before being interrupted by Victoria, who asks if someone else can sit with the children this night. After being asked why, she says Jeff is going to appear to her.

After they try to dissuade her from expecting her dead husband to come back to her, she says she couldn't go on living if she believed that, and runs off. After suggesting maybe Barnabas might help her, Roger leaves to fetch him.

In her room, Victoria sobs over Jeff's watch, yelling for it to tick, so she can know he's near. Finally it begins running again, and he appears as a rectangle of light.

Barnabas arrives and Elizabeth asks him to talk with Victoria. He reminds her that he loves Vicky, but she doesn't care about him, and then agrees to see her.

Meanwhile, Victoria is still yelling at the light rectangle, which tells her that he (Jeff) can never return. Victoria is hysterically distraught until Elizabeth breaks the encounter by knocking and entering. Victoria tells her what transpired, and says she needs to leave to get away from the memories. Elizabeth tells her to think about it, and lets Barnabas in.

Barnabas and Victoria discuss her unfortunate marriage and she tells him she plans on leaving. Barnabas takes this inopportune moment to ask her to marry him again, but is predictably shot down. He says that if she's leaving, this should be their last goodbye, and leaves. She sits down and sobs some more, interrupted by a hand on her shoulder... Jeff.

The couple embrace, and he tells her that her love brought him back for a few minutes, but that she has to forget him because they can never be together. He was allowed to exist for awhile in Jeff Clark's body but he was always Peter Bradford and has to go back. She begs to come with him.

Back in the study, Roger's waiting for a cab, and asks Barnabas to keep an eye on everything for him. After Roger leaves for his business meeting in London, Elizabeth comes down and wonders at Barnabas being downstairs, when she just heard Vicky talking with a man in her room. They rush upstairs.

In Victoria's room, Peter asks her if she's sure she wants to abandon her own time, and she says yes. They hold hands as Barnabas and Elizabeth burst into the room, and watch Peter and Victoria vanish...

Peter: I can never return.

Elizabeth: You're a part of the family. What would we do without you?
Victoria: Oh, I love you all. You're all the family I've ever had.

Dark Shadows - Episode 650 on the IMDb 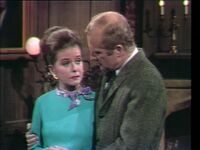 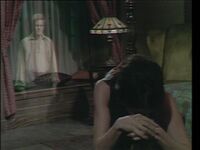 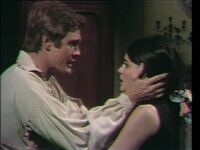 Reunited Lovers
Add a photo to this gallery
Retrieved from "https://darkshadows.fandom.com/wiki/650?oldid=139502"
Community content is available under CC-BY-SA unless otherwise noted.