Upset by Roger's fall down the stairs, Elizabeth calls Professor Stokes for help, who brings a psychic medium to investigate.

Night over the great house of Collinwood. Night filled with unexplained acts. For unbeknownst to the elders, two children have discovered ghosts from the distant Collins past. Ghosts, who still insist on having their revenge against the family. Who are using the children, possessing them to accomplish their aim. And so, a son commits the unpardonable crime and tries to kill his own father.

Roger lies at the bottom of the Foyer stairs, bloodied. Amy brings Elizabeth from upstairs who rushes to his side. From the side doorway, David looks on, guiltily.

Elizabeth tries to take Roger's pulse and asks Amy to get Dr. Hoffman as Roger recovers. Roger gets up and announces that he is fine, that nothing is broken, but that someone is trying to kill him. Elizabeth closes the door telling him that Amy thought she heard a burglar, but Roger says there was no burglar and that someone in the house tried to kill him. He says a wire was stretched across the steps, he felt it before he fell. Elizabeth says if it was there, she would have tripped on it also. She tries to get Roger to sit down, but he goes up the steps to where the wire had been. Roger allows Elizabeth to help him to his room. David, still in a trance, wraps the wire around his hand as Amy returns and tells him Julia is on her way. Upstairs Roger laments this happening right before his trip to London. Elizabeth tells him he can change it, but he insists he needs to go. He asks Liz for a brandy. When Elizabeth goes for the brandy she finds a tarot card, The Tower, on the table. Elizabeth says there is something happening and continues to fret over the card. She recalls that tarot cards are used to tell fortunes and each card means something. She tells Roger that ever since the séance (642) strange things have been happening. David appears and asks if he can stay with Roger, who relents and allows him to stay. David tries to get information about Roger's health and retells Amy's story that there was something in the house, perhaps a burglar. Roger scoffs at the burglar story and demonstrates how fine he is by limping to the brandy. He tells David he will be fine in the morning and David gives him a big hug.

Downstairs Elizabeth looks at the Tarot card and makes a phone call to Professor Stokes. He tells her he was reading up on her family and she begs him to come to Collinwood tomorrow.

Amy is sitting on the staircase when David comes in from outdoors. He tells Amy he can tell she has been back upstairs. She says Quentin wants to see him, but he is upset and says they should never go up there again. She says Quentin will be angry, but David doesn't care. Professor Stokes arrives with the standard "Shouldn't you kids be outside on such a nice day?" lecture. He silently wonders what Amy is talking about when she asks David if she will go with her “one last time”, but Elizabeth arrives and tells the kids to go outside. Elizabeth and Stokes go into the Drawing room and close the door and Stokes says it appears the séance must not have put an end to everything, but that the spirits were quiet at the moment, but she has obviously seen activity. She shows him the Tarot card.

Amy and David talk in the foyer and Amy says she thinks David is scared of Quentin. She tells him Quentin calls him Jamison, who David remembers is his grandfather. Amy says Quentin has instructed her to call him Jamison. Elizabeth asks Stokes about the card, but he withholds information. She says if he won't tell her she will go to the library and find out. He tries to convince her the card is insignificant, but she isn't buying it. He tells her the card is a warning, and if she did not know that already she would not have sent for him. He says the card is a warning of great unhappiness coming to the house. She says he is holding back, and keeps fretting.

Upstairs, David and Amy go to Quentin's room and David announces he is not going to do what Quentin asks if it is going to hurt people. Quentin's music begins playing on the gramophone and David becomes possessed again and the cradle starts rocking itself. Downstairs Professor Stokes prepares to leave, but he tells Elizabeth he will return within an hour with someone who can explain everything. She keeps staring at the card after he leaves.

Madame Findley tells Elizabeth she must not tell her anything about the house or her experiences as she wishes to walk through it without being influenced. Elizabeth agrees. She walks through the foyer babbling and suddenly blurts out “There has recently been an accident in this room!” at which point Amy's eyes grow huge. She tells Amy she knew that and Amy starts to tell her, but Mme. Findley stops her and continues her investigation. Mme. Findley goes into the drawing room and asks if this where the séance was held, she knows because the spirits are gone now, but have left a mark. She begins to go into a trance as David comes down the stairs. She begins talking to her spirit guide, but then she starts talking to someone else. Stokes explains that her normal guide must not be there. The children eavesdrop at the door as she says the spirit is not in the drawing room, but is in the house and she must go to him. She reveals there is a fight and asks the spirits to lead her to the room. She comes out of her trance and Elizabeth gives her permission to explore the house. She explains that there is a war being waged in the house and she must find the one who started it all.

In Quentin's room, David and Amy try to tell Quentin about Mme. Findley and ask what they should do.

Janet: Shadows are still in the air!

Janet: This house is a battlefield. 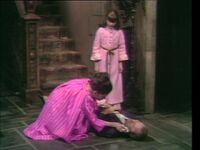 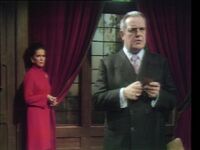 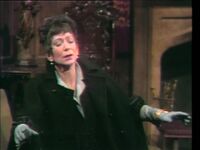 The Sixth Sense
Add a photo to this gallery
Retrieved from "https://darkshadows.fandom.com/wiki/647?oldid=111687"
Community content is available under CC-BY-SA unless otherwise noted.