David and Amy meet the ghosts of Quentin and Beth.

Of all the dark and evil secrets that plague the great house at Collinwood, none has escaped detection longer than the secret behind the wall in the abandoned west wing. For over 70 years, a vengeful spirit has been imprisoned here. Now through the curiosity of two children it has been released, and soon it will bring about the final destruction of the Collins family.

David and Amy meet the ghosts of Quentin and Beth. Amy and David dress up and pretend to be Beth and Quentin. David and Amy bury the skeleton from the secret room . David strings a wire across the staircase causing Roger to fall.

Elizabeth: David gave me his word.
Roger: Yes, he's done that before as I recall.

Roger: (about Amy) I just hope she's not a bad influence on David.

David: If you sound convincing father will believe whatever you tell him. 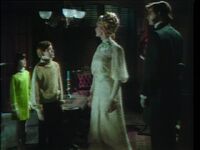 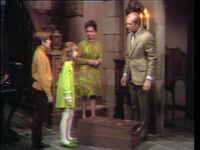 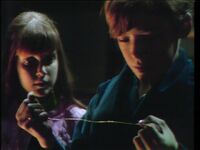 Wire in the Blood
Add a photo to this gallery
Retrieved from "https://darkshadows.fandom.com/wiki/646?oldid=111686"
Community content is available under CC-BY-SA unless otherwise noted.