In the secret room David and Amy find a skeleton.

A violent storm continues over the great house at Collinwood, and it has been discovered that two children have disappeared in the middle of the night. While the adults in the house search frantically for them, the children are busy in an old storage room in the abandoned west wing, about to make a startling discovery of their own. One that will change the course of their lives.

Barnabas: This is not the first time David has wandered away from Collinwood.

David: I like you Amy, you're my good friend, you know that?

David: (to Amy, pushing her toward a ghostly cradle that rocks) She needs you.

Amy: (to Barnabas) It's so good to see you again. 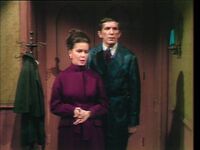 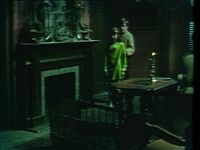 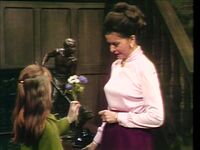 Flowers for Elizabeth
Add a photo to this gallery
Retrieved from "https://darkshadows.fandom.com/wiki/645?oldid=111683"
Community content is available under CC-BY-SA unless otherwise noted.