Carolyn, Roger, and Elizabeth search for David and Amy, who become further embroiled in the intrigue of the west wing when they find a secret room.

The great halls of Collinwood echo the rumble of thunder, the walls are illuminated by flashes of lightning. The storm rages, as if all the elements of nature were in conflict. Inside the great house, two angry spirits are in conflict, spirits of those long since dead. One of them has lured two innocent children to a deserted storage room in the west wing of the house. In that room, unseen terror awaits them.

The kids worry that they'll be trapped in the room all night as David tells Amy about ghosts; Carolyn wakes up screaming, having had a premonitory dream of the deaths of the children. Roger and Elizabeth pooh-pooh her ideas, and Roger finds that the children are missing. As the trio is snapping into action, the name 'Jamison' appears on Carolyn’s mirror. What could Elizabeth and Roger’s father have to do with this mess?

Back in the locked wing, Amy admires an empty armoire. She finds a trunk of clothes and wants to play dress-up, but David doesn’t; he wishes something would happen. Amy hears Quentin’s music.

The kids are not in the basement, which Roger has thoroughly searched. Carolyn suggests the west wing, which Roger locked. Still, they look. Upstairs, the music grows stronger. Amy thinks Quentin wants them to find him, suspecting that he’s behind the wall where the music is strongest. David finds the wall is hollow.

Roger, Elizabeth, and Carolyn find the west wing still locked; as Roger is about to search the grounds, Carolyn feels a hand on her. She believes it’s Magda leading them to the west wing. Roger goes with the insistent Carolyn.

Upstairs, the kids hide from the adults, who have noticed the fallen clock. They hide, speculating that they'll be able to escape after the adults unlock the door. When the adults leave, the kids find they are still locked in. They resolve to ram through the false panels of the hollow wall. Downstairs, Carolyn questions the force that was pushing her to the west wing as Roger goes out to search the grounds.

David and Amy find a door behind the hollow wall. They decide not to open it, and as they fret about how to escape the room, the secret door opens. After a quick discussion, they resolve to explore the room.

Roger: David can do a lot of things but he can't get past a locked door.

Dark Shadows - Episode 644 on the IMDb

Dark Shadows Every Day - Episode 644 - Phoning It In 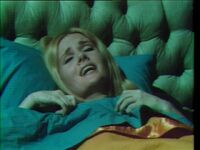 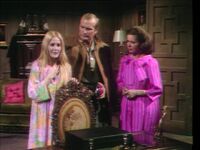 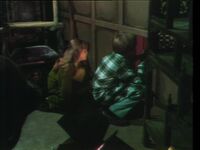 Discovering the Secret Room
Add a photo to this gallery
Retrieved from "https://darkshadows.fandom.com/wiki/644?oldid=139474"
Community content is available under CC-BY-SA unless otherwise noted.