David and Amy become locked in a remote room in the west wing.

Darkness envelopes the walls of Collinwood, there is danger in this night for a seance has just been held in the great house, and the spirit of a mysterious woman has spoken from beyond the grave. A new reign of terror is about to begin.

Carolyn asks Chris why he stopped the seance and he is unable to explain. Roger arrives home and is disturbed by a book falling from the piano, and a letter to his father suddenly appearing. Carolyn suspects it's Magda's spirit, who warned them of a curse. Roger becomes suddenly worried about his son and goes upstairs to check on him. Amy hides from Roger and David pretends to be asleep. After Roger and Carolyn go to bed, Amy and David use a secret panel in the drawing room to go exploring in the west wing, looking for Quentin.

David: I'm not afraid of anything, Amy.

David: (about Roger) He never says goodnight to me. He is acting strange. I can't understand him sometimes.

Amy: You're braver than I am.
David: That's cause you're a girl.

Dark Shadows - Episode 643 on the IMDb 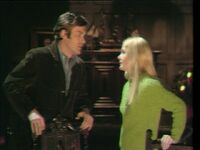 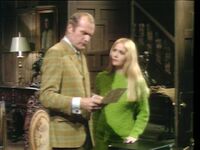 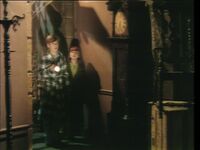 Exploring the West Wing
Add a photo to this gallery
Retrieved from "https://darkshadows.fandom.com/wiki/643?oldid=143791"
Community content is available under CC-BY-SA unless otherwise noted.