During a seance, held to contact Jeff, a spirit named Magda speaks through Carolyn with a warning, but Chris interrupts before anything else can be learned.

There is a storm raging over the great house at Collinwood, a storm that cannot shut out the sounds of the widows wailing, for theirs is a legend that when death is near, the widows rise from the dead and commence their wait for the one who is to die.

Victoria stands at the cliffs of Widow's Hill and contemplates suicide. Professor Stokes and Elizabeth manage to persuade her that there is still hope and lead her back to the house. Carolyn and Chris return from a date and discuss the recent murder at the Blue Whale. Chris is more upset by the death than Carolyn expected.

When Elizabeth and Professor Stokes lead Victoria back into the house, they decide to hold a seance to try and contact Jeff, for Victoria's benefit. Carolyn is contacted by the spirit of a woman named Magda, who spoke of a curse before Chris abruptly stops the seance.

Carolyn (to Chris): There's not much point in being both rude and mysterious. They amount to the same thing.

Dark Shadows - Episode 642 on the IMDb 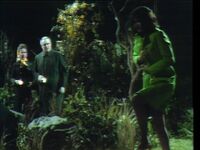 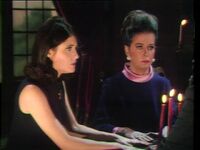 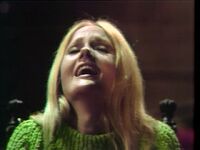