Chris cuts short a date with Carolyn to go back to his room where he turns into a werewolf and later attacks a waitress at the Blue Whale.

A little girl spends her first night in the great house of Collinwood, a night of strange, weird discoveries. For she finds an ancient telephone, its wires hanging loose. But when she picks up the receiver, she hears a faint voice from the past, a voice which orders her to come to him. She knows not why.

David and Amy hold a seance to contact Quentin, however they don't reach him. Chris comes to see Amy to tell her he will not be able to take care of her. Carolyn steps in and volunteers to keep Amy at Collinwood. Carolyn and Chris have a drink at the Blue Whale where Chris sees the mark of the pentagram on the waitress. Later a werewolf breaks into the Blue Whale and kills the waitress.

David: (about the seance) I've done this lots of times.

Dark Shadows - Episode 640 on the IMDb 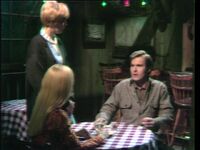 At the Blue Whale 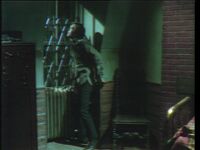 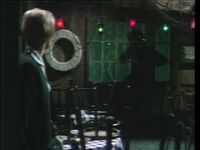 Werewolf Attack
Add a photo to this gallery
Retrieved from "https://darkshadows.fandom.com/wiki/640?oldid=139468"
Community content is available under CC-BY-SA unless otherwise noted.