Julia tries to convince Chris to stay in Collinsport for Amy's sake.

Morning at Collinwood, a morning that should be a happy one. For on the pervious might, Victoria Winters was married to the man she loves. A man whose love has lasted through time. However unknown to the residence of the great house, a mysterious and terrifying event has just occurred. An event which will plunge Victoria Winters and those around her into new terrors.

Victoria returns to Collinwood, and walks slowly to the drawing room, where she collapses in a faint. Elizabeth finds her and as she regains conscious, she tells Elizabeth of Jeff's disappearance.

Julia goes to visit Maggie, who doesn't remember her encounter with Adam. Julia determines that Maggie has blocked it out for traumatic reasons. She tells Maggie that she fainted, after she told Nicholas Blair that she wouldn't marry him. Julia also tells Maggie that Nicholas has left, asking her to say goodbye for him. Maggie believes her. When Julia asks her how she feels, Maggie confesses that she's somehow relieved.

Chris Jennings arrives at Collinwood, and Maggie accuses him of being heartless for leaving Amy all alone. When Julia arrives he gives her money for Amy, and informs her that he's leaving town that night. Julia furiously gives the money back to him, telling him that Amy doesn't need money, she needs him.

Chris tells Julia that he truly wants to stay and take care of Amy, but he just can't, and he has good reasons. She asks what they are, but he refuses to tell her.

Chris: I'm sorry it has to be this way, but it does.

Dark Shadows - Episode 638 on the IMDb 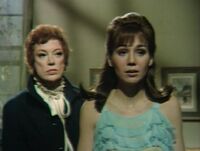 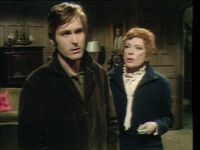 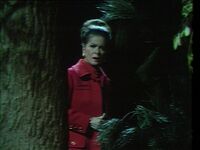 Something in the Woods
Community content is available under CC-BY-SA unless otherwise noted.
Advertisement