Victoria and Jeff are married, but later he starts to feel as if he is being drawn into the past, and then disappears.

Darkness hangs like a shroud over the Collins estate as a stormy night draws closer to dawn. Inside the great house a young man broods over a momentous decision, for he has discovered that he belongs to an era gone by. Now he stands on the threshold between past and present; torn between his allegiance to those he once loved, and to the woman he now loves.

Jeff is clearly upset and Victoria goes to comfort him. He's afraid to marry her, knowing that he may be returned to the past at any time. Victoria is steadfast in her belief that his love will keep them together. He's comforted by her words, but also reminds her that he is the number one suspect in Eve's murder. Victoria tells him that Roger Collins went to the police, and provided Jeff with an alibi.

Just then Elizabeth enters the room, and Victoria tells her of the wedding plans. She and Jeff intend to marry that night, and Victoria wants Liz to be her witness. Liz is surprised by the sudden news, but agrees to support the marriage.

It's just after 3 o'clock in the morning when Victoria and Jeff are married by a justice of the peace. Elizabeth hugs Victoria goodbye, and Victoria tells her that she's never been so happy. Elizabeth slowly leaves, wondering if she did the right thing. Jeff and Victoria spend their wedding night at the Collinsport Inn, where they drink a toast to the future. Jeff is still worried that he may not be able to stay with Victoria, but she is too happy to worry about anything.

Meanwhile Barnabas and Julia return to Collinwood, unsuccessful in their search for Adam. Barnabas wonders if he should look for a coffin, remembering that if Adam dies he will again become a vampire. Julia thinks it unlikely that Adam will die, despite the bullet in his back. She asks Barnabas if he feels any differently and he admits that he does not. They both begin to relax a little.

Julia reminds Barnabas of Angelique, and they make plans to find her coffin and drive a stake through her heart. Barnabas says he wants to do the job himself. The clock strikes four as Elizabeth returns to Collinwood. She tells Julia and Barnabas that Victoria has married Jeff Clark. The news affects all of them deeply.

At six o'clock Julia returns downstairs, having managed to get a little sleep. She finds Barnabas who is still awake and distraught over Victoria's marriage. He confesses that he never really believed Victoria to be in love with Jeff, but Julia tells him he must accept her decision. He says he does, and honestly hopes that Victoria will be happy.

Later, he and Julia go to Angelique's coffin, where Barnabas accidentally steps on Nicholas's magic mirror. Barnabas opens the coffin and finds it empty. Barnabas knows that Angelique is not gone for good.

Back at the Inn, Jeff and Victoria are happy in their new life together. Victoria gives him a wedding present, and he reminds her of their times together in 1795. Victoria worries that Jeff is spending so much time thinking about the past, but he is unable to stop himself. As he remembers the time of the trial, he feels himself again being pulled back to the past. Victoria tries to get him to fight, but he says it's too strong this time. She runs to the phone to call Professor Stokes, just as Jeff disappears. She screams.

Jeff: Even though you can see me and touch me, and I can hold you in my arms, I don't exist here and now. And if you marry me, it'll be like marrying a corpse.

Victoria: (to Jeff) No one can take you away from me now.

Barnabas: (about Angelique) She may be gone, but she's not gone for good. Sooner or later she will be with us again.

Jeff: It's almost as if... as if it were happening now. I can feel the same emotion. Remember when we were waiting for the jurors to bring in the verdict? I thought they'd believe me. Sure, reasonable, honorable men, oh they'd believe me, sure. They wouldn't let us be separated. They'd give us a life together, that's for sure. They wouldn't take you away from me. But they did. And now... now they're taking me away.

Dark Shadows - Episode 637 on the IMDb 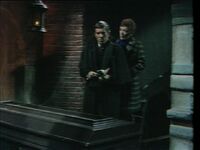 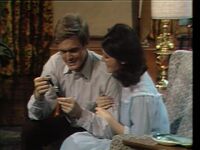 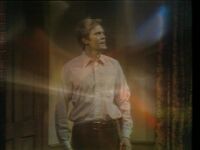