After attempting to kill Victoria, Adam goes to Professor Stokes for help as Jeff arrives to begin a strange ritual.

A great storm races through Collinwood. A rainless wind which seems to sweep violence all over the great estate. For vengeance has become one man's obsession. And in the basement of this house, he takes his revenge on the man who made him, for he means to kill the girl his enemy loves and in the same grotesque way his own mate was turned into a skeleton.

In the Old House basement laboratory, Adam tries to kill Victoria the same way Eve died. But he is interrupted by Barnabas and Julia. Barnabas shoots Adam in the shoulder.

Adam tries to throw the switch to kill Victoria, but is stopped by Barnabas before they both nearly pass out. Adam recovers and runs away, with Julia in pursuit. Barnabas checks Victoria. Julia returns and starts to tend to Victoria, she tells Barnabas she will be alright and perhaps he should get a coffin prepared, just in case Adam dies from the gunshot wound. Adam breaks into Prof. Stokes home. The telephone rings and Adam picks it up, not answering it. The caller is Jeff Clark. Adam hangs up. Adam then finds a dagger and hides behind the door as it begins to open.

Prof. Stokes enters and Adam puts down the dagger. Stokes tries to call a doctor, but Adam hangs up the phone, begging him not to call Julia. Stokes calls someone else and tries to get Adam to calm down. At Collinwood, Julia watches Victoria sleep. Barnabas returns from telling Carolyn what happened. They quiz Victoria about what they saw and heard, but she does not remember anything after Adam abducted her. She tells them Adam went insane and begs Barnabas to stay with her until the morning. Julia says Barnabas can't, but she will. Back at Prof. Stokes', Adam has been treated by a friend of the Professor. Stokes says that Adam has not chosen his friends wisely and that he failed Adam because he taught him, and then did not follow through. Adam says he cannot be loved because of his appearance, but Stokes says that is the easiest thing to change. Jeff Clark rings the doorbell and Adam begs him not to answer because of what he has done to Victoria.

Jeff tells Stokes about the phone call, but Stokes says he was not here as he was out gathering herbs for a ritual. He tells Jeff he wishes he would reconsider. Jeff says he knows now he is really Peter Bradford using the body of Jeff Clark. Stokes tries to convince him to forget everything and marry Victoria. Jeff eats an herb and Stokes freaks out because they are dangerous without the proper ritual, so he turns off the lights, lights a candle and begins. Jeff goes into a trance and writes his name... Peter. He says he came to the present "because I love her and I want to see her once again". At Collinwood, Victoria wakes, hearing Peter call to her. She runs out of the room past a dozing Julia. Peter relives the day he was hanged, begging to see her again. Victoria bursts into the room, grabs him and says she will not let him go back, that if he commits his love to her "they will let him stay".

Professor Stokes: You can be assured that death is no better than life, so don't look forward to it.

Professor Stokes: (to Adam) You won't die, not from negligence anyway, as long as you are in this house. But I think you knew that before you came here.

Professor Stokes: (to Adam) If you don't like the old Adam, you can make a new one. I need a project.

Professor Stokes: (to Jeff) Frankly, my advice would be simply to marry the girl. Consider it a rather unusual marriage, but then, most marriages are one way or another.

Adam: No one will ever love me.
Professor Stokes: I can't possibly tell whether you're right or not, I've never been much of a prophet.

Dark Shadows - Episode 636 on the IMDb 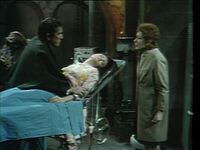 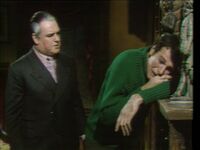 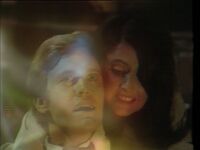 The Lovers
Add a photo to this gallery
Retrieved from "https://darkshadows.fandom.com/wiki/636?oldid=142156"
Community content is available under CC-BY-SA unless otherwise noted.