Adam vows to kill everyone who lives at Collinwood, starting with Victoria Winters.

The great house of Collinwood is shrouded in darkness and all is silent. Ominously silent, for this has been a night of violence. Violence that will continue. On a remote corner of the great estate one man has witnessed a terrifying event. One which will set off a chain of events, all of which will lead to a single moment of horror and destruction”.

Barnabas enters the Old House and tells Julia that Nicholas is dead, they are both very pleased. They are unaware that at Collinwood, Adam mounts the stairs vowing vengeance on the entire family, starting with Victoria.

Barnabas asks how Maggie is feeling and where Adam is. Julia believes Adam is in the basement, but when they go downstairs they discover he is gone and Barnabas rushes to Collinwood. Meanwhile Carolyn and Victoria talk about Carolyn's recent disappearance. Carolyn tells Victoria she had to get away because she had become very attached to someone who went away. She is unaware that Adam is listening outside the door. After Carolyn leaves Adam bursts in and forces Victoria to leave with him, but she makes a break for it and screams. He hits her, knocking her unconscious just as Carolyn comes to investigate the scream.

Carolyn chews him out and then tries to reason with him, reminding him of the lessons Professor Stokes taught him. It fails to convince him and he says he doesn't want to hurt her. She is taken aback by this, and says she doesn't believe he could ever hurt her. She reminds him of the tenderness he has shown to her, even the love sonnet they once read together. Adam softens, and declares that he loves her: if she had only loved him back, none of this would have happened. He decides to take Victoria with him and Carolyn tries to call the police. Adam knocks the phone from her hand, and unable to come up with a solution, throttles Carolyn until she passes out. For a moment he looks at the two women on the floor, and seems unsure what to do. He then picks up Victoria and carries her away.

Barnabas arrives just as Carolyn awakens. She tells him about the kidnapping and he calls the police. Back at the Old House, Julia paces, waiting for news, and then hears a noise. She walks to the basement door and Adam grabs her from behind. He forces her to sit with him in the drawing room and have a conversation with him. He says he has no reason to hurt anyone now that Eve is irrevocably dead. She tells him Nicholas is gone for good, but he doesn't care. She goes to her medical bag to get a sedative, but he refuses to let her give it to him. She asks what is in the basement and when he says he does not know, she goes to investigate. Adam follows her and we hear her scream.

Barnabas returns to the Old House to find Julia moaning. He tells her Adam has Victoria and they discover he has locked the door to the basement from the inside. Adam begins the experiment with Victoria and Eve's skeleton, upstairs Barnabas and Julia hear Victoria scream. Victoria writhes in agony while Adam remembers everyone who was mean to him. Julia and Barnabas enter the laboratory from one of the secret passages. Barnabas has a gun and threatens to kill Adam, but Adam taunts him with the reminder of Dr. Lang's tape recording that said they are linked and if anything happens to him Adam, then Barnabas will suffer. Julia reminds him it is true, but just as Adam is about to throw the switch that will electrocute Victoria, Barnabas shoots him.

Adam: They will all die! First, the woman Barnabas loves... Victoria Winters!

Carolyn: I became very attracted to someone, and he went away.
Victoria: I didn't know you were seeing anyone.
Carolyn: No one did.

Dark Shadows - Episode 635 on the IMDb

Dark Shadows Everyday - Episode 635 - One Damned Thing After Another 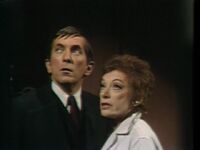 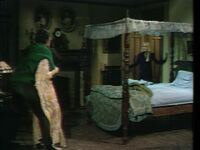 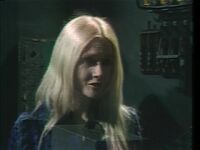