Night over the great estate of Collinwood. A night which many will feel will never never end. And when it does, no one knows who will be alive and who will not. For one man is engaged in a frantic effort to appease the cruelest, most evil master of all. To do this he must bring a new convert, and with her spirit make a dead body alive. In this house by the sea, the first ritual starts, in a small room, with an altar draped in black.

At the Old House, Eve's body lies on the operating table in the basement. Barnabas tells Julia this is the last time they will ever perform this experiment, but Julia fears it is not, as they are at Nicholas' mercy. Nicholas arrives in a good mood until Barnabas mentions that he seems to "specialize in second chances" and tells him that he should not have brought Tom Jennings back. Nicholas begins to deny knowing anything about that, but Barnabas tells him he destroyed Tom at his house just that morning. Nicholas points out the irony that a short time ago that could have been Barnabas, and it could be again. Julia insist they stop bickering and get the experiment over with and Nicholas leaves. Adam arrives and Barnabas tries to kick him out, but Nicholas insists he stay.

When Maggie arrives, Barnabas and Julia panic, and Nicholas tells them she is doing it of her own free will because of her love for him. Maggie appears to be much more sedate than usual. When Barnabas objects, she makes a veiled reference to the things he has done to her in the past. Adam threatens to start hurting folks, but Nicholas tells him that won't be necessary and puts his hand to Adam's heart and starts making him have a heart attack, which also affects Barnabas. Julia begs Maggie to make him stop, but Maggie tells her that is only possible if they get started on the experiment. Nicholas has Adam lie down in an adjoining room and tells Barnabas that it will only take three words for him to make Adam's heart stop and kill them both. Maggie assumes the position on the table and Julia gives her a mild sedative and they begin. Nicholas kisses Maggie on the forehead before the machines are started. Maggie begins to moan, and then to scream.

Maggie passes out and at the controls, Barnabas begins to recall Maggie and Nicholas' statements. Julia is talking to him, but he is distracted and does not notice that the monitor has gone too high. Then Barnabas snaps back to reality and tells Julia something is wrong. She tries to adjust the machine. Maggie screams she is going to die as Eve's hand begins to rise. Barnabas turns off the machines and starts to wreck the laboratory.

Nicholas tries to immobilize Barnabas with his powers, but finds he has lost them. He begs "The Master" to not desert him now, but it is no use, Barnabas continues his rampage. Nicholas runs and begins to strangle Adam. Julia and Barnabas get there just as Adam awakens, confused as to why Nicholas is attacking him.

Adam rushes to Eve, but she has been reduced to a blackened skeleton. Nicholas makes his escape and Barnabas runs after him telling Julia they must chase him now while he is vulnerable. Julia yells for him to stay so they can save Maggie. Adam goes catatonic in a corner. Julia works frantically to save Maggie and when she does come around she appears to have no memory or who she is, where she is, how she got there, or who anyone is.

Maggie tries to remember anything and is distressed when Julia does not explain. Julia leads her upstairs leaving Adam alone with Eve's skeleton, which he covers. He tries to figure out who is more to blame, Barnabas or Nicholas, and finally decides on Barnabas out of force of habit. In the drawing room, Julia tries to stimulate Maggie's memory, telling her she has been in the house and in the room and even showing her Josette's music box, but Maggie remembers none of it and becomes more distraught.

Julia takes her upstairs to show her Josette's portrait, and Adam makes his escape out the front door. At the edge of the cliff, Nicholas pleads to 'The Master' to give him just one more week to perform the experiment and set everything right, but he is consumed by flames as a happy Barnabas watches. Meanwhile, Adam sneaks into Collinwood and heads up the stairs.

Julia: Poor motherless Eve. There's a poem about that.

Barnabas: Where are your powers now Nicholas Blair?

Dark Shadows - Episode 633 on the IMDb 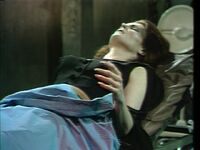 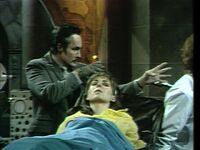 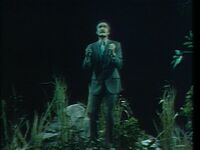