As Nicholas prepares Maggie for the Black Mass, Chris is reunited with Amy and later transforms into a werewolf in his hotel room attacking the hotel clerk.

A brilliant morning sun illuminates the walls of Collinwood and all is serene in the great house. But not far away, in a strange house by the sea a desperate man waits. This day will decide his fate, and the young woman he has chosen to be his bride.

Nicholas waits for Tom and wonders why Adam has left, and why everything is going wrong. He summons Maggie to come to him and to decide she wants and needs him. He states (to the air) "Tonight we will be united... in death".

Adam arrives, slamming the door. Nicholas tells Adam he made a mistake in how Eve was created, but that his new mate will be warm and loving because Maggie will supply her life force. Adam says he would rather be alone than with someone like the old Eve and he does not trust Nicholas. Adam then swears to kill the new Eve if she is anything like the old one. Adam exits as Maggie arrives. Maggie drags it out, but tells Nicholas she will marry him and they embrace. He tells her they will be married tonight because he must leave for London tonight and wants to take her with him. At Windcliff Sanitarium, Chris waits to see Amy. While the nurse goes to get Amy, he checks the weather forecast and sees the Full Moon is tonight. He panics and says "No! Not again".

Amy and Chris are reunited, but she just stares at him, not speaking. He tries to bribe her with a box of paints, but she throws them across the room and asks "Why didn't you come before"! He says he wanted to but stayed away too long. She dismisses him, but when he does not leave she asks if he will stay. He tells her he can't and she screams at him to "go away!". He hugs her and apologizes, saying he will stay in Collinsport, promising not to leave her. Back at the Collinsport Inn Chris asks Mr. Wells if he can change rooms. He asks for the room at the top, away from the street, more secluded from the rest. Mr. Wells shows him the room and Chris seems pleased when he sees the grating over the window. He asks Wells to to lock him inside for the night from the outside and to ignore anything he hears as he is a writer who often acts out the parts he is writing. Wells seems dumbfounded.

At Nicholas' house, Maggie paces in her wedding dress, being generally nervous as time approaches for the minister to arrive. Nicholas offers her some champagne to calm her nerves and puts some drops in hers from a vial from his jacket pocket. They drink up and later Maggie begins to feel dizzy. She passes out in Nicholas' arms and he carries her away, never even mussing her veil.

At the Collinsport Inn, Mr. Wells hears a commotion from inside Chris Jennings' room and unlocks the door. He goes inside to investigate, seeing the room has been torn apart. He looks towards the camera and screams.

Nicholas carries Maggie into a black room filled with candles and lays her on an altar and begins the Black Mass. We see Wells being dragged away, his face horribly mangled and cut up. Nicholas continues the Black Mass, summoning The Damned, saying they will live forever as members of The Damned... he takes a sip of wine from the ceremonial cup (630) and kisses her.

Nicholas: (about Maggie, to himself) Tonight we will be united... in death. 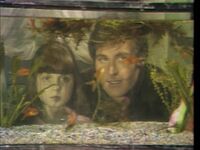 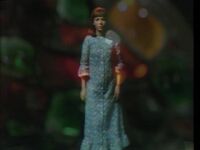 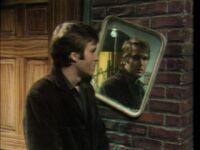 Mirror Image
Add a photo to this gallery
Retrieved from "https://darkshadows.fandom.com/wiki/632?oldid=111680"
Community content is available under CC-BY-SA unless otherwise noted.