Nicholas removes the stake from Tom and sends him to kill Victoria.

Under a turbulent sky, Collinwood sleeps. None within its great walls can know the terror this night will bring. Not far away in a house by the sea there is another who sleeps, the sleep of the living dead. In a moment, this condemned soul will be unleashed by a man who is waging a desperate battle against time.

Nicholas removes the stake from Tom Jennings and proclaims himself as Tom's new master. Tom enters Victoria's bedroom through the window and advances on her, fangs bared...

Victoria screams and faints. Barnabas arrives just in time to save her. Chris Jennings arrives at Nicholas Blair's house. Nicholas is obviously surprised, but manages to control himself. Chris starts asking about Tom's death and tells Nicholas he believes Tom was murdered. Nicholas sees Tom outside the window and is preoccupied, but manages to tell Chris that he knows nothing. Chris looks to the window in time to see something, but it leaves before he can see it is his brother. Nicholas escorts Chris to the door and offers his hand, which Chris does not shake.

Victoria wakes up and tells Barnabas what she thought she saw, and Barnabas confirms that it was, indeed, Tom Jennings, who has become a vampire. Victoria surmises that since Tom worked for Nicholas, it must have been he who made Tom a vampire, and sent him to kill her because of what she knows, and because she tried to stop him from marrying Maggie Evans. Barnabas promises that he will deal with Nicholas and both she and Maggie will be safe.

Harry Johnson arrives at Nicholas' house, having watched Eve's corpse being buried. There is a knock on the door and Nicholas sends Harry to the cellar to retrieve a shovel while he answers the door. It is Barnabas who accuses Nicholas of sending Tom to harm Victoria. Nicholas denies it. Barnabas demands that Victoria remain unharmed, or he will not carry on with the experiment. Nicholas acquiesces and guarantees Victoria's safety. Barnabas also demands that Nicholas leave Maggie alone and destroy Tom. Nicholas reluctantly agrees. Barnabas leaves and Harry returns from the cellar. Nicholas decides to dig up Eve first, then deal with Tom.

Harry balks at the idea of exhuming a grave, but Nicholas persuades him. As they leave, Barnabas watches from the woods, with Tom following him closely. Nicholas and Harry arrive at the graveyard and Nicholas orders Harry to start digging. Back at the house, Barnabas goes back inside Nicholas' and starts to head to the cellar, unaware that Tom is behind him. At the graveyard, Nicholas has Harry open the coffin to confirm it is Eve, then tells him they are going to carry it to the Old House. In the cellar, Barnabas finds Tom's coffin then heads upstairs. In the drawing room he is attacked by Tom. Barnabas grabs two candlesticks and uses them as a makeshift crucifix to hold Tom at bay. Tom begs for his life as the sun is starting to rise. Tom continues to scream as he fades and disappears.

Dark Shadows - Episode 631 on the IMDb 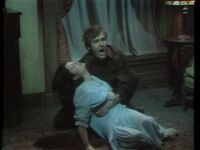 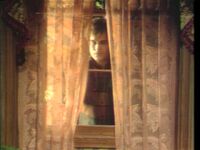 Brother in the Window 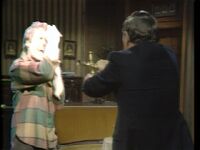