Nicholas tries to convince Julia to resurrect Eve, then is given 48 hours by Diabolos to complete his work.

Somewhere in the darkness of this night, one man's existence is in terrible danger of being snuffed out. On this night, in a house by the sea, he will soon feel the overwhelming presence of the supernatural.

A disoriented Maggie comes to visit Nicholas at his home but is not sure why. As Nicholas tries to convince her that it was because she wanted to see him, she begins to smother and passes out. Moments later she and Nicholas are transported to The Underworld and Diablos begins to speak through her.

Nicholas pleads with Diablos to spare Maggie's life and admits his guilt to the charge of falling in love with her. Diablos tells Nicholas that he will be called at Midnight to account for his actions. Then Nicholas and Maggie are returned to Nicholas' house and Maggie wakes up feeling confused, but fine. Meanwhile, at Collinwood Elizabeth asks Julia, who was heading out the door, to step into the drawing room. Elizabeth tells Julia that Barnabas called her from Windcliff Sanitarium and asks if it is true he was on the verge of a nervous breakdown. Julia tells her it is true. Elizabeth then asks if Barnabas might be released, so that she can take care of him at Collinwood instead of at The Old House. Julia says it is impossible, but she will be going to evaluate him tomorrow. She agrees to allow Elizabeth to go with her when she sees him. Nicholas arrives and asks if he could speak to Julia concerning Barnabas. Elizabeth looks concerned.

Elizabeth leaves, offering the Drawing Room to Nicholas and Julia for privacy. Nicholas tells Julia he needs her help. He says he has plans for Adam and Eve and that he needs to repeat the experiment. Julia flatly refuses. Nicholas says she will only need to do the last part with Eve's old body and a new life force. Julia still refuses, telling Nicholas that Eve was an evil woman and she is glad she is dead. Nicholas tells Julia she has 3 minutes to change her mind, but Julia tells him he is obviously upset and must be desperate. Nicholas recounts the story of the Biblical Adam and Eve, then tells her he personally knows Satan (under a different name) and that her Adam and Eve will be Satan's new children. Julia tells him he has really blown his chance now and that he will have to use his powers on her to force her into repeating the experiment. Nicholas tells her without Eve, Adam is useless to him and he will destroy him, killing Barnabas in the process. Julia panics and says she will have to read Dr. Lang's journal, but doesn't know if it will work or not (too many variables). Nicholas leaves. Julia teeters around for a while trying to decide what to do, but finally picks up the phone in the foyer and places a call to Barnabas. She does not see Elizabeth eavesdropping on the top of the stairs.

At Midnight, Nicholas appears before Diablos who tells Nicholas he will return to his realm permanently. Nicholas tells him that Angelique is a vile creature and he should not believe a word she says. Diablos counters that Nicholas knew this about Angelique from the beginning and that his failure was partially caused by him giving her too many second chances, a mistake he is not willing to make. Nicholas tells Diablos that he has arranged to have the experiment repeated and his plans salvaged. Diablos tells him he has 48 hours to do so, then he will return to the Underworld forever. Nicholas asks to be left on Earth without his powers instead. Diablos asks how he plans on surviving, but gets no good answer. Diablos states he is not willing to consider that, but that he will allow Nicholas to remain with Maggie in his realm. But before Maggie can enter the Underworld, she must be "sacrificed on the black altar" at the Black Mass. Nicholas looks appropriately horrified.

Nicholas: I need your help.
Julia: I don't know if I should be flattered or frightened.
Nicholas: You have cause to be both.

Nicholas: (to Julia): We both know nothing is impossible.

Julia: Are you gonna send Angelique after him again?
Nicholas: No, something far worse than that.
Julia: Nothing is worse that that.

Dark Shadows - Episode 629 on the IMDb 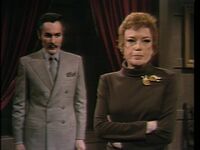 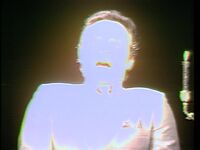 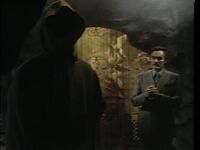