Angelique summons Diabolos in the underworld and informs him that Nicholas has failed him.

A storm rages over Collinwood as the terrifying events of this night occur. But there are earthly confrontations beyond the sight of the stormy sky that have yet to take place. Now in a secret place a young woman begins a strange forbidden ritual. A ritual which will will lead her to the strangest and most terrifying journey of all.

Angelique begins an incantation to "The Master" and finds herself transported to the Underworld where she is granted an audience with Diablos.

Angelique pleads that Nicholas has treated her unfairly and gone overboard with his demands. Diablos reminds her of the circumstances which Nicholas was sent (519-526) and that she was being justly punished for being a screwup. She then tells Diablos that Nicholas has failed him because he was too distracted by his love for Maggie Evans. Diablos seems surprised by this. Angelique asks for the power to try and outwit Nicholas, and asks that if she succeeds that she be freed of the vampire curse. Diablos says he would be amused by her attempt and may consider it.

Nicholas returns from his date with Maggie to his house by the sea where he is greeted by Adam in a bad mood. Adam says he is mad because Eve has gone and he doesn't know where. Nicholas promises to talk to Eve and ask her not to leave so often. There is a knock on the door and Nicholas sends Adam away. The visitor is Julia who refuses to take the hint she is not wanted. Julia says she wants to see Adam, and Nicholas lies and tells her he is not there. She tells him she doubts this is true since Adam has just murdered Eve. Adam eavesdrops as she tells him that Adam has just murdered Eve.

Julia tells Nicholas about the discovery of Eve's corpse and that it must have been Adam. Adam then appears lying (badly) that he had nothing to do with it, but his tone and too many details give him away. Julia asks to be left alone with Adam and Nicholas reluctantly agrees. Once they are alone Julia tells Adam she is glad Eve is dead, but she is concerned about the consequences for Jeff Clark, Barnabas and him. Adam says he can believe she is concerned for the other two, but does not believe she is concerned for him. Julia states this must be because of some maternal instinct since she created Adam. She reminds him of Professor Stokes teachings of right and wrong, which greatly upset Adam. He denies it again and orders her to leave. Privately he resolves to never trust anyone ever again.

Nicholas and Adam fight, but Adam refuses to admit he killed Eve, and asks Nicholas what he plans on doing about it anyway? Nicholas contemplates this when he hears a knock on the door and orders Adam to leave. To Nicholas' delight, it is Maggie, but she seems disoriented and does not know why she is there. He says he hopes it is to see him, but she becomes disoriented and unable to breathe. She passes out and all the lights go dark and Diablos begins to speak through her telling Nicholas he must prepare for judgment! Nicholas looks appropriately worried.

Diablos: (to Nicholas): Prepare for Judgment!

Julia: (about Eve) She was an evil, vicious woman.

Julia: It's about Eve.
Nicholas: What about her?
Julia: She's dead.

Adam: You don't care about me.
Julia: Curiously enough I do care.

Dark Shadows - Episode 628 on the IMDb 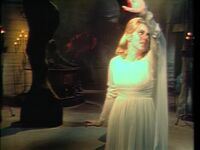 Angelique in the Underworld 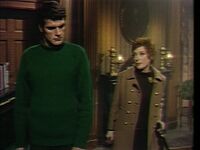 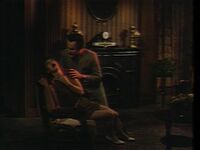