Chris Jennings arrives in Collinsport, his resemblance to his brother Tom is shocking to all who knew Tom was a vampire.

The terror of a violent thunderstorm hangs over the great house of Collinwood. But in a rooming house on the outskirts of Collinsport a greater terror awaits for a young man and a woman. A terror that is only a moment away.

While arguing, Jeff opens a closet in his apartment and looks panic stricken. Victoria asks what is wrong and he tries, without avail to get rid of her. She opens the closet and sees Eve's strangled corpse.

Jeff examines Eve's corpse and tells Victoria she is dead. Victoria asks who she is, and Jeff tells her. Victoria asks Jeff if he killed her, and if not, who did. She convinces Jeff to call the police, and Jeff worries that the circumstantial evidence will look bad, but Victoria tells him any delay will increase suspicions. She promises to see Jeff through this ordeal. Meanwhile, Adam wanders through the woods, stopping to think about his crime, worried what Nicholas will do when he finds out. Angelique appears to Adam and tells him she knows that he killed Eve. She tells Adam that Eve was evil and that Nicholas knew all along that Eve was in love with Jeff Clark. Adam takes Nicholas' defense, but Angelique tells him that Nicholas has been using him all along. She tells him about Danielle Rogét, who Adam knew as Leona Eltridge. She tells him Nicholas was never his friend, that he used Adam as he uses everyone. She tells him that neither of them can escape Nicholas unless they work together to dispose of him. She says that when Nicholas finds out Eve is dead he will think that Jeff Clark killed her. He must go back to Nicholas' house and pretend he knows nothing, then appear shocked when Nicholas tells him of Eve's murder. Meanwhile she will be preparing "for Nicholas' departure". Meanwhile, a mysterious figure appears outside Joe Haskell's window at the hospital. After a nurse checks on him and turns out the light, the door opens and a figure appears. Joe's eyes widen when he recognizes the figure.

The figure comes closer in the room as Joe goes into full panic. He tells Joe he is not Tom Jennings, but Chris. The nurse comes back in and they tell her it was a mistake. Chris apologizes for scaring Joe and asks about his condition. Chris is sorry he missed Tom's funeral, but he is hard to track down. He asks for detail's about Tom's death and Joe says there are few clues. Chris asks about the bite wounds, but Joe has no information. He tells Joe he thinks Tom was murdered, and he plans on investigating. Joe asks how he plans on doing this, and Chris pulls out a list of names which include Jeff Clark and Nicholas Blair. Joe changes the subject and asks if Chris has seen his sister, Molly, who "fell to pieces" after Tom's death, and is now at Windcliff Sanitarium, having been sent there by Dr. Hoffman. Julia arrives and screams when she sees Chris, thinking he is Tom. He explains he is Tom's brother and says she is one of the people he wanted to speak to, offering to drive her to Collinwood so they can talk on the way. She asks Chris to step outside and then asks Joe why Chris was not notified when Tom died. Joe explains that he did send word to Chris, but Chris is always hard to track down, He fills her in on Chris' background, always moving around and never staying in one place. He disappeared and left Collinsport altogether, not even returning when his parents died a few years ago. He sent a letter to Tom saying he did not hear until after their funeral. He said he was here to investigate Tom's death and she should talk to him and get him to leave town. We see Chris eavesdropping outside the hospital window.

Chris drops Julia off at Collinwood and she asks him inside. He says Julia must have known Tom well or she wouldn't have had the reaction she had when she saw him. Julia dismisses it as having examined him and his unusual wound. She says he appeared to have bitten by an animal, but she does not know what. She tells him she assumed he came there because of his sister, Molly. He says he plans on seeing her soon, and Julia explains Windcliff is her hospital, and she is doing well, but seeing him would do her a world of good. He explains he cannot take her with him because of the kind of life he leads, always on the go “making a living the best way I can”. She accuses him of being irresponsible and for some reason he gets upset and storms out. As Julia goes up the stairs, she sees Victoria who asks for Roger. She tells her Jeff is in jail and someone needs to bail him out. She tells him about discovering the body in his room and that the police think he did it. Julia asks who it was, and she says it is Eve. Julia obviously recognizes the name, but denies it when asked. She sends Victoria off to find Roger. Julia puts her gloves back on and leaves the house. Meanwhile, Angelique goes to the place she has hidden her coffin and lights a candle. She hopes if all goes well that Nicholas will be banished and if "The Master" is pleased enough, he may even lift her curse. She starts a long incantation which ends with her being consumed by fire as she begs for her life and screams.

Angelique: Prince of Fire, I call upon the flame to summon you. I call up all the dark creatures of nature to summon you here to me. Prince of Fire, rise, hear me as I call to you. Rise from the curling flame. I summon you in the name of the seven plagues, in the name of the charred and blackened stars that reigned at my beginning. To rise out of the darkness of the Earth. I call you forth from the mouth of the dragon, and of the beast, and of the false prophet. I call you forth from the subterranean rivers of blood. From the smoke of torment which rises forever, and ever. In the name of every evil spirit, evil, to be obedient only to you. I invoke you, here to me, now. Now!

Chris: The kind of life I lead is all wrong for her.

Dark Shadows - Episode 627 on the IMDb 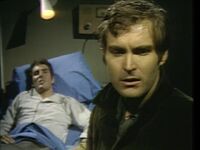 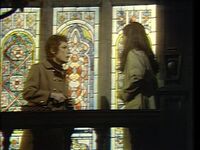 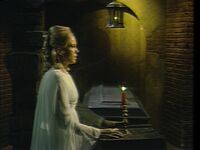