Jeff reels from seeing the empty grave, but Roger tries to convince him that it means nothing. Jeff states that he no longer believes that he is really alive and from this century. Roger convinces Jeff to stay away from Victoria while in this state. Meanwhile, Victoria decides to go to the cemetery, but Elizabeth convinces her to stay. She tells Elizabeth that Jeff told her that Eve was the one who travelled back in time and brought back The Collins Family History Book. Vicki makes Elizabeth swear that the men will not keep any secrets from her. Looking through the book Victoria reads about her own execution in 1795/96 and flashes back to the gallows and Collinsport Gaol.

Jeff returns to his room with a plan to go to New York City. He begins to pack his suitcase when Victoria arrives. He lets her in and tells her he has decided to leave because he does not know how much longer he will be allowed to stay in the 20th century now that he knows he really is Peter Bradford. She tells him there is still time to get married tonight, but he keeps packing. Jeff sees something frightening in the closet and tries to get Victoria to leave, but having seen the expression on his face, she goes to the closet and sees Eve's corpse.

Dark Shadows - Episode 626 on the IMDb 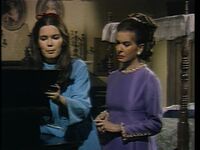 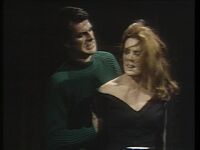 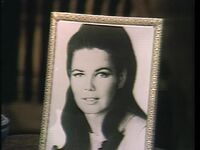 Photograph of Victoria
Community content is available under CC-BY-SA unless otherwise noted.
Advertisement