Eve gives Jeff the letter he wrote in 1796 which causes him to postpone his wedding to Victoria until he can dig up Peter Bradford's grave.

Happy is the bride the Sun shines on. And this day on the great estate of Collinwood should be a happy one indeed. But as the guests assemble, to celebrate a marriage, there are certain signs of dark clouds nearing the Sun. For a book mysteriously has appeared, a book that Victoria Winters carried with her into another century. A book which she left there. On the terrace, the groom waits nervously to go in and take his marriage vows while one woman secretly watches determined to stop him before that time comes.

Elizabeth helps Victoria get dressed for the wedding while Jeff paces nervously on the terrace. Eve appears with the note Peter Bradford wrote and gave her in 1795. She tells him the letter is proof he is really Peter. He agrees to let her read the letter and when she gets to a mention of Victoria she shows him that the letter is in his handwriting. Eve smugly tells him the guests are waiting.

Eve tells Jeff they can leave and be together. When he refuses her she tells him he can find more proof at Peter's grave. Eve leaves as Roger appears to take him inside, but Jeff tells him he can't go through with it and must see Victoria. Inside Elizabeth helps Victoria put on Naomi Collins' wedding veil and she tells Elizabeth she feels like she really is a part of the family. Elizabeth tells Victoria she will always be a part of the family. Roger comes up and tells then Jeff wants to see Victoria and Victoria goes to see him. She knows something bad is happening.

Elizabeth grills Roger on what is wrong and he explains that he does not know what is going on. Elizabeth and Roger talk about expectations and Roger worries that Elizabeth will relapse into melancholy. Outside Jeff tells Victoria he loves her, but that he needs to postpone the wedding. He shows her the note and points out the handwriting and date. She asks who Danielle is. He tells her this is proof he lived in 1795 and says he cannot marry her if he really is Peter Bradford. He tells Victoria about Eve. He tells her he knows nothing of Eve and what she wants. Victoria says as long as he does not love her now that it really doesn't matter if he lived before, but he says he needs to go to the Old Cemetery. She tells him it doesn't matter to her, but he leaves.

Roger and Elizabeth talk in Victoria's room and Roger prepares to leave, but Elizabeth asks him to stay with her. Elizabeth suddenly feels that Victoria needs her and leaves to be with her. At Eagle Hill Jeff locates Peter's grave and begins to exhume him after an internal debate over whether he really needs to know. On the terrace Victoria tells Elizabeth that Jeff is gone and she does not care that he is gone, but there will be no wedding today. Roger offers to tell the guests to leave while Elizabeth tries to comfort her. And Victoria ties all the troubles back to receiving the Collins Family History Book and says that the past is catching up with them. Roger gets to the cemetery while Jeff is digging up Peter in his tuxedo and threatens to call the police. Jeff opens the coffin with Roger watching and discovers it is empty.

Victoria: (to Elizabeth) The past does follow us, doesn't it? No matter how independent we think we are, it follows.

Victoria: I'm not going to disappear. Collinwood will always be home to me.

Roger: Vicki may need you more now than ever.

Elizabeth: I prayed that for once everything would be well.

Elizabeth: Nothing ever works out for any of us, does it?

Jeff: Is there a law against opening your own coffin?

Dark Shadows - Episode 625 on the IMDb 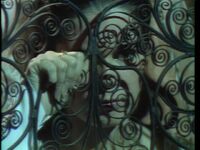 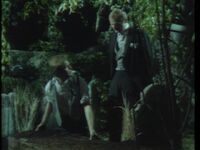