This page does not adequately cite one or more of its sources, and needs attention. If you can provide references from valid resource material, feel free to edit it to add a citation or correct the data.

Nicholas sits in his drawing room stewing over Eve, wondering if she has run off. Adam joins him asking where Eve is and Nicholas says she went for a walk. Adam tells Nicholas their relationship is going nowhere but Nicholas assures him that Eve will come to care for him. Adam is showing signs that he is tired of both Eve and Nicholas. Adam leaves and Nicholas makes plans to discipline Eve, not noticing that she has re-materialized behind his back.

Adam tells Nicholas the happy news that Eve is in love with him. He asks if Nicholas had anything to do with it. Nicholas says he didn't and they will all leave Collinsport very soon. Adam leaves and Eve enters from the basement and asks if Nicholas is pleased. She tries to reassure him she is cooperating, but he still looks suspicious. Back at Collinwood, Victoria returns (without the flowers) and Elizabeth tells her presents have arrived and they go about opening gifts. The first gift is a necklace from Miss Norris, a nurse from the foundling home who used to let her wear the necklace on special occasions. It had been in her family for many generations and now she wants Victoria to have it. Victoria muses over how she always felt alone and uncared for at the foundling home, yet she realizes now there were lots of people there who loved and cared for her. Next she opens The Collins Family History Book which Eve has sent with a card that says “PETER” in block letters. Elizabeth does not recognize the book and Victoria explains that she took the book back to 1795 and left it there. The episode comes to it's conclusion without Victoria saying anything about the name Peter. 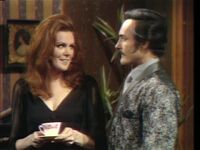 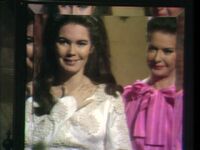 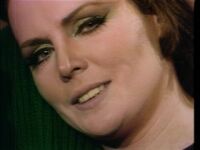 Eve Schemes
Add a photo to this gallery
Retrieved from "https://darkshadows.fandom.com/wiki/624?oldid=123830"
Community content is available under CC-BY-SA unless otherwise noted.