Eve travels in time to 1796 when she was Danielle Roget to stop the marriage of Jeff and Victoria. There she enlists the aid of Ben Stokes to save Peter Bradford and discovers the Collins Family History Book.

This is Collinwood in the year 1968. But for one person, on this night, it will be the Collinwood that existed almost two hundred years ago. In another house not far from here, a strange ceremony has taken place, and it has enabled one woman to transcend the barriers of time for six hours. During this brief visit to the past, she will see and do things which may tragically affect the present. The place is Collinsport in the year 1795.

Eve fades away to 1796, arriving at the Collinsport Gaol just as the warrant for Peter's execution has been received and read.

Danielle tells the gaoler she is here to see Peter Bradford. She explains they were once to be married, but she has been gone for six months. The gaoler tells her Peter certainly had a way with the ladies, because only a few weeks ago he was to marry a young woman ("Gloria Winters, " he says) who was hanged on a charge of witchcraft. When Danielle says she must be dead now, the gaoler says that she was certainly hanged, but she requested a mask before the execution and when they removed it, the body was that of another woman. He takes Danielle to see Peter, who does not face her, saying there is nothing between them. Danielle says it is ironic that he condemns her for killing a man and now he has done the same. Peter states the difference is that she is guilty and free, and he is innocent and going to die. She makes a plan to break him out of gaol, saying he only needs to be ready when she comes for him. She recalls that Angelique told her she cannot stay more than six hours. She has obviously convinced herself that if she stays more than six hours, she will change history and stay in the past with Peter. She says she needs time and Ben Stokes, the one man who could never refuse her anything. At Collinwood, Joshua Collins calls Ben into the drawing room and gives him the news that Peter Bradford has been condemned to hang and there is nothing anyone can do about it. He only hopes that, between Peter's execution and Victoria's, the hysteria in town will die down. He also tells Ben he wants him to destroy the Collins Family History Book.

Ben asks Joshua why he wants the book destroyed, and Joshua says he believes the book is evil, and if there is any such thing as the product of the Devil, this is it. He tells him that he has read the book and it frightens him, but he plans on perpetuating many of the inaccuracies of the book so that they will become part of history. He intends to write his own history without the real cause of Barnabas' death and what he became after, Naomi's suicide, or “any mention of Millicent's association with "that scoundrel." Instead, Barnabas will have gone to England and never returned, Naomi will have died of natural causes, and Millicent will have lived a life of spinsterhood. Joshua believes once the book has been destroyed, the curse on the family will be lifted, so he orders Ben to take it into the woods, far away, and burn it. Back at the gaol, Peter Bradford asks Mr. Prescott, the gaoler, to bring him a pen and paper as his last request because he wants to leave someone a note. Just outside Collinwood, Danielle meets Ben and begs him to meet her at the gaol with two horses. She intends to drug the gaoler to sleep while the other man there is preparing for the execution. Ben asks for assurances that the gaoler won't be harmed and tells her he is doing this for Peter, not for her, but first, he has a book to burn. Danielle tells him he can burn the book later, but the matter with Peter is more urgent. She takes the book from him and tells him she will return it when he comes with the horses.

Danielle realises that Victoria really did travel to the past and must have brought the book with her, and that she can make use of the book herself. Ben arrives with the horses and tries to get the book back, but Danielle sends him out as the gaoler returns. She tries to seduce the gaoler, but when he tells her Peter is writing someone a note, she decides to go ahead and see him. Peter says he is not going to try and escape, that he is going to keep his promise to die with Victoria, and live with her again in another life. He gives her a note he says will explain all his reasons. The gaoler and his assistant come to take Peter away. The gaoler turns to Danielle and says she can go "into the waiting room." Danielle reads the note and realizes it is what she needs to stop Jeff and Victoria from getting married. She puts the note in the book, clutches the book to her chest, and fades away in front of the gaoler.

Ben: (to Danielle): Helping you in one of your schemes means hurting someone else. I'll have no part of it.

Mr. Prescott : (to Danielle): A hanging is a gruesome thing. Not a sight for a lady.

Mr. Prescott: You're not going to be around to get an answer.

Dark Shadows - Episode 623 on the IMDb

Dark Shadows Every Day - Episode 623 - This Is Happening 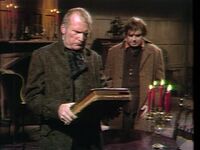 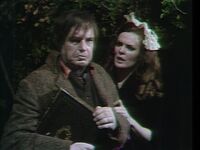 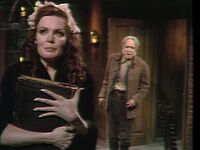 Return Journey
Add a photo to this gallery
Retrieved from "https://darkshadows.fandom.com/wiki/623?oldid=139443"
Community content is available under CC-BY-SA unless otherwise noted.