Angelique offers to send Eve back in time if she will help protect her during the day.

Nothing that will happen on this day or the night that will soon follow can stay the actions of the evil forces threatening Collinwood. Not far from the Collins estate in a house by the ocean, a man who possesses terrifying powers of evil has learned that he was betrayed by a woman: not an ordinary woman, but one of the living dead.

Nicholas opens Angelique's coffin and finds it empty. He vows to find Angelique during the day and destroy her. After she awakens, Angelique summons Barnabas, not knowing he is at Windcliff. At the house by the sea, Eve teases Nicholas about Angelique and says she will not lift a finger to help him. Angelique uses the mirrior to see what Nicholas is up to. Nicholas says Barnabas is in the hospital and wants to send Eve to watch Jeff. She agrees, if Nicholas will help her prove Jeff is Peter. Nicholas refuses. Angelique smiles as she watches the whole thing.

That evening, Jeff attempts to rush his wedding to Victoria by moving up the date. He sends Victoria away after seeing Eve and angrily tells her to go away before he goes into the house. Angelique then comes out of the shadows and makes a deal with Eve: she will send Eve to the past for a short time to prove that Jeff is actually Peter Bradford if Eve can get Nicholas out of the house. Eve lies to Nicholas, telling him that Angelique is headed toward the hospital to see Joe. Angelique then performs a ceremony to send Eve back to the past for six hours, where she is again Danielle Roget.

Eve: (to Nicholas) I wouldn't lift a finger to help you.

Dark Shadows - Episode 622 on the IMDb 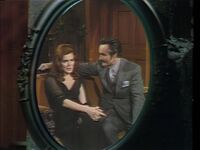 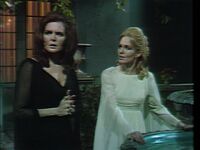 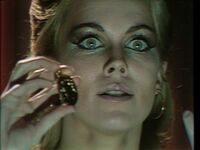